When submarine San Juan failed to report its position to headquarters at the stipulated time Nov. 16, 2017, the Argentine Navy commenced search and rescue operations for the vessel and its crew in its sea control patrol area of the South Atlantic.

The magnitude of material, human and logistics resources involved in the operation (27 ships, 14 aircraft and over 4,000 people, both military and civil, national and foreign), as well as the length of time of uninterrupted activity, made this search and rescue operation for the damaged submarine unprecedented anywhere in the world.

The Navy faced its most difficult situation since the Falklands War, directing the means deployed mile by mile around the clock, without rest and while using the best technology in the world in a search which, at the time of writing, still continued with the hope of dispelling the uncertainties and fears tormenting the crew’s relatives and all members of the Navy.

The San Juan’s sudden, unexpected crisis had a tremendous social impact. This extraordinary circumstance forced authorities to divide their attention between the search and rescue operation and informing the public, trying to synergize its actions in both areas while protecting the relatives from premature distress for as long as was considered prudent.

Relatives were given priority when reporting daily events. Two visits to the search coordination center at the Puerto Belgrano Naval Base and three trips to deployed units were also arranged to help them understand and appreciate the size of the search operation.

Relatives were given priority when reporting daily events. Two visits and three trips were arranged to help them understand and appreciate the size of the search operation

Almost as soon as the search for the submarine was declared, a crisis cabinet was organized. It was made up of the Navy officers responsible for Institutional Communications and authorities from the Ministry of Defense.

The cabinet adopted the strategy of transparently informing the community from a single official source, reporting specific facts that had been reliably confirmed to avoid any speculation and carefully protect sensitive information. This avoided leaks from unqualified sources sharing unfounded information or leading to erroneous conclusions, and explanations were given as new incidents arose.

Once the crisis broke, events happened very fast, taking place on a growing scale with increasing speed and an overriding feeling of urgency. Consequently, press releases were sent for 26 consecutive days, up to four times a day. Information was disseminated through press conferences at the Libertad building (the Navy Chief of Staff’s headquarters), supplemented with the daily written releases.

The institutional communications through the media to the community regarding the search for the submarine were accompanied by very good media relationships, but, due to the operation’s extended time and the prevailing uncertainty, unspecialized opinions began to appear, giving priority to disconnected facts and seeking news without any serious analysis.

Another activity, just as important, was having to give unscheduled press conferences to provide official information, purely to counter the numerous inaccurate or false versions of facts circulating on social networks, leading the public and relatives to incorrect conclusions that confused them, causing them anguish, generating false expectations and hurting their feelings.

One lesson learned from this was that a single spokesperson should have been established from the outset, or perhaps a crisis committee in Mar del Plata—the submarine’s usual station—with the relatives present.

It was a good idea to have set the press conference times for 10 minutes after the hour so as not to interfere with headlines on the TV networks.

In coordination with journalists, infographics were produced to give the public a better technical understanding of the facts. Unfortunately, from an audiovisual point of view and due to the remoteness of the operations, the media had few videos of the units at work, which would have helped people grasp how complicated the search was.

Handling the institutional communications and professionalism in carrying out the search operations consolidated the institution’s internal culture, increased member pride and strengthened its image despite criticism, which was inevitable owing to the complexity of the facts, tragic setting and opposing interests. 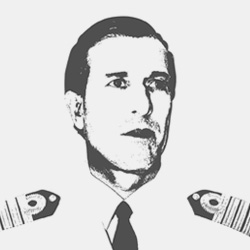 Enrique Antonio Balbi
Head of the Institutional Communications Department and spokesman for the Argentine Navy
Born in Bahia Blanca Aug. 18, 1965, Balbi completed his primary and secondary education in Mar del Plata (Argentina) before graduating from the Military Navy School as Midshipman with a degree in Naval Systems. He went on to study at the Submarine School in 1991. He is now an Operations Analyst who completed a postgraduate course in Disaster Risk Management and holds master’s degrees in University Management (pending his thesis) and Organizational Communications Management. He currently holds the rank of Ship Captain and is head of the Institutional Communications Department, as well as a spokesman for the Argentine Navy. [Argentina]