Challenges of innovation in multinationals in 2020

“An elephant like Telefónica can be made to dance.” This is the way the chairman of Telefónica, José María Álvarez-Pallete, describes how large enterprises also innovate. Innovation is even more necessary in telcos, owing to the decisive transformation that the sector is undergoing with a view to achieving future growth. We are just at the beginning of an unprecedented technological revolution, with millions of new objects connecting to Internet every day, consolidation of Artificial Intelligence and irruption of quantum computing.

In times like these, innovation plays an even more important role. Yes, Telefónica is an elephant that has been around for almost 100 years, but innovation is part of its DNA and it has proved capable of adapting and dancing to the tune of the new times, always riding the different waves of technological disruption. We are ready to ride the current wave and, once again, offer our customers the best that technology can offer to help them in their everyday tasks and improve their living standards.

“We are just at the beginning of an unprecedented technological revolution”

AN INNOVATING ELEPHANT WITH A LENGTHY TRACK RECORD

It is unusual in itself for a company like Telefónica, which innovates every day from all corners, to have a Chief Innovation Officer, my present position. But unlike this innovation, highly focused on everyday needs and short-term business operations, the focus of the global innovation area is to impact in the medium and long term. Our mission is to anticipate the company’s needs and contribute to its future growth by creating new capacities in our networks and new services for our customers.

To do this, we tackle innovation from two angles: one internal and the other open to collaboration with third parties. There is no point in innovation without collaboration. We would be shutting out the talent, ideas and technology that are out there and can help us to grow.

So we innovate internally in core initiatives using own resources and with third parties through one of the most important entrepreneur support ecosystems in the world with our Wayra and Open Future initiatives and investments made by Telefónica Innovation Ventures.

“We are adapting our networks to the future, preparing them for the arrival of 5G and accommodating new technologies such as edge computing”

It is vital for Telefónica to provide the best connectivity so that we can offer our customersincreasingly more and better services. This is the first requirement for access to the digital world. Consequently, many of our internal innovation projects focus on connectivity, Telefónica’s core business. We are adapting our networks to the future, preparing them for the arrival of 5G and accommodating new technologies such as edge computing, with which we will be able to improve services we already provide and offer new ones that will be key to development of the Internet of Things.

Many of these projects stem from our intrapreneurship program based on the Lean Startup methodology, a program we have called Lean Elephant, through which our employees devise and promote projects created within the company. The selected projects are initially managed as startups, and only those that prove they have great potential to impact the company’s business prosper. This is the case of Internet para Todos (IpT) [Internet for Everyone], an initiative that is already being developed successfully in Peru and which we want to extend to other Latin American countries. Some 100 million people in that region have no access to mobile internet so are unable to benefit from the economic and social advantages it offers. Those people generally live in remote, isolated areas where it is very costly to lay conventional telecommunication lines. IpT is making it possible to roll out the necessary networks under an economically sustainable innovative model combining the use of alternative technologies and third-party collaboration. This allows our business to grow, while we extend connectivity to ensure that nobody is left out, and we are very proud of this.

Eight years ago, Telefónica plunged into uncharted waters and set up an ambitious startup acceleration program, Wayra. We were aware of the talent in the markets in which we operated and wanted to promote it to prevent an exodus to other countries. Things have not been easy for Telefónica, a company that many entrepreneurs wrongly considered an elephant incapable of innovating. We have learnt a lot along the way, from entrepreneurs, startups, our own mistakes… But we can now say that Wayra, together with Open Future, our network of entrepreneurship partnered with public and private institutions; Telefónica Innovation Ventures; and our scouting teams in some of the most important innovation hubs in the world such as Silicon Valley or Israel; have enabled us to create a very powerful innovation ecosystem that is essential for the growth of our business.

LESS “SEXY” BUT LOYAL AND CONSTANT

I have always said that Telefónica is an innovative company that may seem less “sexy” when compared with companies and technological platforms that have been digital from the outset. But we have 95 years of innovation behind us, during which we have been reinventing ourselves and looking ahead every single day. Almost a century of constant innovation that is vital if we are to offer our customers the best service and make our business grow. It is also vital to enable others to innovate through our networks, because without connectivity, the wave of technological disruption we are on would be inconceivable.

“Without connectivity, the wave of technologica disruption we are on would be inconceivable” 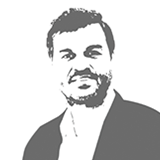 Gonzalo Martín-Villa Peña
Chief Innovation Officer at Telefónica
He has led three innovational verticals since May 2016, as Global Innovation Officer: Core Innovation, Entrepreneurship & Innovation Ventures; and two Telefónica subsidiaries: Alpha and Telefónica Educación Digital. He previously headed Telefónica’s start-up accelerator Wayra, of which he was CEO from its launching in 2011, helping it become one of the largest technology accelerators in the world, with operations in 12 countries across two continents. His experience expands from Europe to Latin America where he headed the Technical Secretary’s Office for five years. He also held different positions within the Legal Department, on a regional level for Telefónica International and on a local level as legal counsel for Telefónica Móviles México. [Spain]