Exponential communication for a change of times

I have been working in the field of innovation for 15 years now. It is true to say that innovation has changed from what it was, or what we understood it to be, 10 years ago, and what we now call innovation will no doubt cease to have that consideration within three or four years’time, if not earlier. Over this decade and a half working on corporate innovation projects, I have perceived a considerable change, not so much in where and how we apply innovation as why we need to innovate.

Whereas a few years ago an innovation strategy was almost ornamental, superfluous, like an extravagant eccentricity that only a privileged few could afford, nowadays nobody questions the “imperative” of innovating, the more or less pressing need spanning all industries. There is sufficient evidence that the future (if not the present) of companies that have not committed to innovation is very complicated. I know I don’t need to remind anyone of the cases of Kodak, Nokia, Blockbuster, Sears, ToysRUs, or more recently Thomas Cook or Forever21, and dozens of other cases that have hit the headlines, which we all recognize as victims of this digital transformation and which succumbed to the disruption caused by the Uberization or Amazonification of their sectors. Would they have fared differently if they had included innovation in their strategic plans or operations, or in the culture of their teams? We will never know.

This is not a time of change, it is a change of times, in which the old rules, the old maps, seem to be of no use in the new times.

So what can we do in the face of this threat? Threat or opportunity? This is probably the first dilemma. According to an ancient Chinese proverb: “When the wind of change blows, some people build walls, while others build windmills”. In my opinion, this is a very poeticway of expressing the possible attitudes to this new scenario. The fact is that the wind of change is blowing hard, gusty, almost galeforce, blowing away the scaffolds of industries and companies: technological change, rapid and exponential; political change in the intersection of populism and new proposals (from both the left and the right, and forces that are shattering former consensus); demographic change, as the baby boomers retire and the millennials and centennials enter the labor market with new values and attitudes; economic change with new business models based on the immediacy of enjoying different experiences and indifference to material property… Powerful changes for those who built windmills to harness the energy or that are able to demolish even the highest walls, as Dorian or Lorenzo have done (destructive category 5 hurricanes in 2019). Did anyone mention climate change?

Can these changes really affect a firmly established industry such as communication? The question could not be more rhetoric. Where is the public we reached before, so effectively segmented into channels and times? What sources of information are genuine and legitimate, within the widespread skepticism generated by the avalanche of irrelevant viral memes and fake news disguised as post-truth sensationalism, which seek only to get us to click on them so that they can place a cookie on another device that tracks our activity and continue to feed those bottomless data lakes with data betabytes? Is it possible to be among those who are going to make things happen, instead of among those to whom things are going to happen? How can we effectively get ready for this “exponential tsunami” without risking the business that is currently essential for generating resources?

The greatest challenge of any company, regardless of its size, is to strike a balance between exploiting the resources it has (talent, capital and time) and exploring new business models or new concepts, often exposing themselves to uncertain outcomes? How far is it wise to experiment in these exploratory voyages without compromising profitability and the expectations of shareholders and directors? It is well known that almost all remuneration models incorporate incentives for achieving certain safe, measurable and reliable results… This is ontologically incompatible with innovation. To paraphrase Einstein, “When we are innovating, we do not know what we are doing”. Collaboration through open innovation dynamics has proved an effective formula for meeting this challenge of harmonizing exploration and experimentation with the efficient exploitation of resources. The growing importance and prominence of innovation hubs, authentic ecosystems of enterprise biodiversity, is due to symbiosis -or in corporate language win/win- for participants, whereby the transfer of best practices among their respective, specialized players enables the group to benefit without having to give up its own resources. The exponential acceleration of technologies such as robotics, drones, selfdriving vehicles, photovoltaic energy, genomics and addictive manufacturing (3D printing) can be put down to both Moore’s Law and reciprocal collaboration platforms based on trust and Open Source, with no time or space barriers. In the area of communication and PR, those technologies are virtual reality (more and more integrated with augmented reality, redefined as extended reality); Artificial Intelligence fed with big data, which converts those data into knowledge and messages through new devices that communicate with us through natural language interfaces; data generated by a growing network of interconnected devices (Internet of Things, or IoT); and that technology, which we are not yet familiar with or fully aware of, but which promises to transform the structures of trust in our societies like no other technology has done before: the chain of encrypted, decentralized blocks that we know as Blockchain. 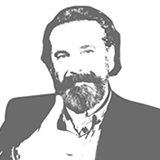 Nacho Villoch
CEO of Kamiwaza 2020
A law graduate and specialist in international marketing through training, in addition to several post-graduate degrees (from IESE, IE and Colombia), he has lived and worked on 4 continents (from Singapore and Hong Kong to Paraguay and Bolivia, including Lisbon, New York and Miami) in executive positions within the financial sector. Nacho Villoch, an all-terrain communicator, is an active generator of contents on communication of innovation, as well as the other side of things, innovation in communication. He has worked in this area for more than fifteen years, carving out a solid reputation in the field. [Spain]