I’m NOT NORMAL. ARE YOU?

Hiii! Allow me to introduce myself. My name is David Rodriguez, and before I get started, I want you to know that I’m not normal at all (and after you read this, you may be surprised to know that neither are you).

Whenever I tell someone “I’m not normal,” they immediately associate it with my cool and peculiar walk. Well, the truth is that people don’t usually consider it as cool as I do. In fact, some think of it as a problem, or call it a “disability.” I put that in scare quotes because sure, my legs have been through their fair share of bumps and bruises, but they haven’t caused me nearly as much pain as what I like to call mankind’s greatest disability: Fear.

In my case, I was already playing at a disadvantage when I was young. I was obsessed with collecting things, but even this was tinged with fear of having so many things. But the most tenacious of my fears were definitely fear of rejection and fear of vulnerability.

These two fears ended up shaping my personality. They were a big part of why I wanted to be a professional DJ and Paralympic swimmer (obviously I had to make a splash, in one way or another). This period of my life was quite interesting, and not only because I won more than a few swimming medals (given that there were basically only three of us at the Paralympics, you became Spanish champion if someone got sick). I came away from it with a lot of personal lessons, most importantly that I wasn’t going about music and sports the right way. In fact, they were nothing more than coping mechanisms I was using to get society to see me as any other member, and that was a HUGE MISTAKE.

I realized that the problem was not that society failed to accept me, but rather that I was
failing to accept myself. Disability is a mirror that makes you face your fears, and some of
them are truly terrifying.

I realized that the problem was not that society failed to accept me, but rather that I was failing to accept myself. Disability is a mirror that makes you face your fears, and some of them are truly terrifying.

As soon as you open yourself up to that idea of self-acceptance, everything changes. You stop confronting life and start connecting with it. This mindset is how I went on to achieve the most amazing and incredible thing I’ve ever done. I created the world’s largest producer of smiles and happiness (and, no, it has nothing to do with cannabis).

I created the Pegasus Foundation, perhaps my single greatest achievement. This is because it’s more than just a foundation, it’s a way of life that has since enabled me to find my own purpose in life.

Essentially, the Pegasus Foundation is the physical and palpable representation of my raison d’etre, which is the creation of a world revolving around our philosophy’s five central pillars: Empathy, companionship, equal rights, equality, and, of course, love. And now, the dream that conquered my heart is conquering the hearts of thousands of others, all looking to build a new society capable of moving away from traditional standards, escaping “normality,” and focusing on what truly matters: People. No other movement has had such an intense flow, such a wave of generosity, kindness, and love. We are the abnormalizing force that society dearly needs.

Our goal is none other than a paradigm shift in disabilities and the Voluntary Sector. How? By creating a movement of universal access, capable of normalizing differences, emotions, and fears through socio-educational programs focused on sports and emotional intelligence. This will help improve interpersonal relationships across all walks of society, until discrimination, condescension, and paternalism are things of the past. Doesn’t that sound great?

So now that you know my story, there are two options before you: 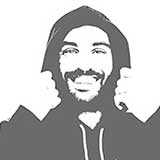 David Rodriguez
CEO and Founder of the Pegasus Foundation
David Rodriguez holds a degree in audio production from SAE INSTITUT in Madrid. He chairs the Pegasus Foundation, which fights to change the current disability paradigm and the voluntary sector through programs that combine sports, therapy, and emotional intelligence programs. Rodriguez was featured in the “‘Future Leaders” study published by LLYC in partnership with Trivu. For his work with the Pegasus Foundation, he has received awards such as Coca Cola GeneradorES, EU Social Entrepreneurs, Campus, and the Solidarity Talent Award from the Botín Foundation. He has also given TED Talks and spoken at the Forbes Summit.