We live in uncertain times.  In our personal lives, every one of us is facing new set of life rules to live by on a pitch where a pandemic had never entered into been part of our game plan. We have also had to reorganize and rethink our day-to-day. In our professional lives, with luck, we will also have had to (almost) entirely ditch our plans for this year and come up with new targets, a new plan, a new direction. I say “with luck” because my intention is to underline something that everybody already knows: Tthat which remains still, perishes, withers, and slumbers. We needed a pandemic to put us to the test, to bring out our resilience, our drive; that which we like to call leadership.

Because, what is leadership for a CEO at the moment? It is influence capacity, indeed, but it is also the responsibility of to giveing every one of his or her their employees responsibility over their own to lead themselvesself-leadership, leading them with empathy and, perhaps more than ever, with transparency, assertiveness, and humanity. We all deserve more human leaders, and everything suggests that a more human leader has arrived to stay; one that is necessary for the new upcoming and current generations. In one of the most recent reports by the consultancy firm McKinsey’s most recent reports, entitled “From a room called fear to a room called hope: A leadership agenda for troubled time,”, they accurately talk about how when people believe that a leader is concerned about their well-being, commitment, and success, they  helping them move from a room called fear to that room called hope.

Skillful leaders demonstrate their concern by expressing compassion about the emotional damage and anxiety being inflicted by the crisis at hand,, and as well as through the actions that they and their organization take in response. They acknowledge that the news is bad and that things might get worse before they get better. And they are present, both physically and emotionally. Along the same lines, people are more willing to accept and implement tough or complicated decisions when they believe that their leaders are worried about them and are trying to do their best for the common good rather than looking out for themselves –. eEven when that decision based on for the common good fails to meet their objectives directly.

COVID-19 has brought us major life trials, from which and we do not yet know whether we will emerge from them better or not. However, what we do know is that we are all different already. We therefore need every member of the organization to take up their position and apply that self-leadership leadership to fully expand their capacity, define targets, trace a route to follow, and pull in the same direction. Without clear self-leadership, we will have difficulty leading others. Self-leadership requires method and discipline, like an athlete conscientiously training for the Olympics. Can you imagine Rafael Nadal without that iron will and discipline of his? By the way, I invite you to listen to what he said after his latest win at Roland Garros. It was, a fine example of positive mentality and effort.

We
therefore need every member of the organization to take up their position and apply that self-
leadership to fully expand their capacity, define targets, trace a route to follow, and pull in the
same direction.

Furthermore, leadership is not at odds with hierarchy, and it should not come to rest on the figure of the “boss.”.  In fact, existing and future organizations will be promoting horizontal and inter-personal leadership between departments, which is key for multi-disciplinary teams and even multi-cultural and offshore teams. Leadership is influence, indeed, but it is also responsibility. Very seldom do we reflect on the latter, and it requires more maturity to exercise influence. Responsibility is demonstrated by accepting mistakes and mtaking decisions.

The responsibility of aA modern leader’s responsibility has mutated evolved one step beyond influence to stand alongside words with a semantic meaning similar to the ability to transcend and the capacity to inspire. These concepts -– so intimately linked to the famous and overused concept of purpose -– are key to understanding and defining the relationships we want to develop within the organizational system of an organization and in our personal lives:

A modern leader’s responsibility has evolved one step beyond influence to stand alongside
words with a semantic meaning similar to the ability to transcend and the capacity to inspire.

The world and its people are eager for leaders who transcend or, better yet, who move us, evoke emotions in us and change us. Let’s start with ourselves. 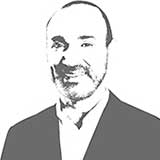 Francesc Noguera
CEO Banco Sabadell in Mexico
Francesc Noguera holds a degree in Business Studies and an MBA from ESADE Business School in Barcelona, as well as a global master’s in Digital Business from ISDI. He began his career at Arthur Andersen, where he was a consultant and auditor for entities in the financial sector. During his career at Banco Sabadell, he held various executive positions in the international arena. Noguera currently leads Banco Sabadell in Mexico, a subsidiary of the Spanish bank that he set up in 2014 with a team of 12 people. It currently stands among the top 10 banks in the country for business banking.