The CADE por la Educación conference in 2013 had the same title as this article. Education cannot be covered in a single conference. We need to determine a specific area so we can deeply talk about it. This conference chose the role of private entities in education.

As it happens in other Latin American countries, in Peru during long decades the same ideas have been repeated until they have become what we could call an “official thought” and what a lot of people and unfortunately businessmen have accepted. The idea is that education belongs to the public responsibilities and the private sector has no responsibility in that aspect. This concept has also created an inverse subsidiarity where private agents have to act where the State does not act or where it allows them to act.

We are facing a tsunami. There is a huge migration from state’s education to the private one. As an example of some official numbers in a national level the number of students in private institutions between 2000 and 2011 were shocking. In primary education the percentage raised from 15.1% to 26.7%. In secondary education the 13% turned to 21.8%. In Lima, basic education went from 15% to 42.5%. The percentage was almost three times higher than in the last decade. In higher education it went from 40.1% to 60.2% which means a growth of 50%.

In other regions and countries we can see similar numbers. The reason is always the same one: the State is too slow and children and young people cannot wait. This tsunami reminds of a revolution: a change in the relationship between the private and the public sector and a change on the priorities of the system, a change on the participations and performance of the agents and a change in the paradigms, terms and concepts. As J.F says, a new space and ethic for the participation of private entities in education opens new perspectives, offers new performances and creates new rhythms and balances.

For this reason, CADE por la Educación suggested three main purposes to businessmen. The first one was to stop looking at education as if it was responsibility of the State and start to face it as the main social task of our own societies. The second purpose was to stop seeing it as a social responsibility of companies –which it is true– and also see in education an opportunity to be part of the education development. The third purpose was to use and implement their business visions and attitudes to approach education: as well as they create worthy business, education is also an opportunity to create a worthy business activity.

Nowadays companies are called to take part of education –which, as we all know, is the key for development–

CADE por la Educación also analyzed the differences and gaps between the education offer and labor market offers which are multiple and changeable. It was observed that one of the main reasons for these differences was the lack of correct, sufficient and pertinent information available. The challenge is how to find, spread and distribute the information in an adequate and efficient way.

The conference concluded with a call to action looking for convergences and permanent relationships between academic actors and business actors; promoting the creation of an educational observatory which will offer the labor market to young people and the society in general, transparent and complete information; calling for the permanent improvement of the education’s quality and reminding the innovating role of businessmen. In this sense, businessmen were invited to open new ways, break paradigms and look to the world connecting them to it and repeating successful experiences or identifying new, creative and accessible opportunities with high impact in society. They were last reminded that they are the ones who hold the main role in the new education and the leaders –and not only mere observers– of the educational revolution which is essential for the development of countries and people. 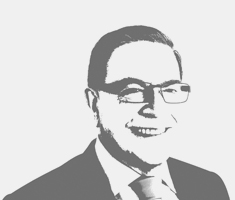 Luis Bustamante
Rector Emeritus at the Peruvian University of Applied Sciences. Former President of FIPES. Former Senator
He is Rector Emeritus at the Peruvian University of Applied Sciences (UPC). Between 1999 and 2010 he was Rector at UPC; between 1990 and 1992 he was Senator of the Republic and Founder and President of the Directing Council of the Asociación Peruana para el Fomento de las Ciencias Sociales and of the Federación de Instituciones Privadas de Educación Superior (FIPES). He is a visiting Professor at the Francisco Marroquín University (Guatemala) and Honorary Professor at the National University of San Agustín and at the Catholic University of Santa María (Arequipa). He was awarded with the IPAE award in 2002 for his work as a businessman in Peru and his participation in the area of education.