It would be very difficult to describe what the fundamental vectors of Spanish foreign policy are. Probably, because it doesn´t have any. One of the symptoms of the institutional crisis which Spain is suffering, in addition to the economic one, is a result of the vaguely defined way of how its foreign projection should take place, its confusion in the location of territories of mutual interest with the different regions of the world and its shyness in international relations. To come to this discouraging conclusion −although realistic− maybe it is necessary to go back to the enormous pendulum of positioning and aspirations that took place in the early years of this century. We went, almost without any solution of continuity, from the Azores Summit on 15 March 2003, in which José Maria Aznar, with George Bush, Tony Blair and Durão Barroso, wanted to raise Spain far above its possibilities drawing it into the Iraq conflict, to the Alliance of Civilizations which José Luis Rodríguez Zapatero promoted in the General Assembly of the United Nations on 21 September 2004, a reactive initiative to the tough alignment of his predecessor with the former US President.

Between one policy and another there was no coherence at all, no guiding thread that connected them and no political stance that made them compatible. Both were extreme and artificial and proposed in the form and in the content, an almost radical contradiction. Nothing is left of either of them today. If the replacement of George Bush and Tony Blair, with that of Aznar added that trio of the Azores to the storehouse of memory, the alliance which Rodríguez Zapatero promised has gobbled it up, on top of the economic crisis, the enormous transformations of the Arab countries in which the proposed West-East connection that the former Socialist president of the Spanish Government proposed has not played any role.

Spanish foreign policy went, without a break and in a contradictory way, from the Summit of the Azores to the Alliance of Civilizations

The role of Spain with regards Latin America and the European Union was spoilt by this abrupt and unintelligible movement, that caused an undisguised uncertainty on the Old Continent and in Latin America, surprise in the face of the unfavorable turnaround that the Spanish foreign policy of the PSOE took, moving from a close relation with the White House to a greater proximity and understanding with leftist populist regimes. As a result, years later, due to the Great Recession, on the one hand, and due to the internal institutional crisis, on the other, Spain from an international perspective is in no-man´s land. Its absolute priority in this historical time consists in −with a financial rescue on its back– applying the recipes of the European Commission, the International Monetary Fund and the European Central Bank, which channels Spanish energy abroad in the community forum and in the exhausting dialogue with Brussels. The Government does not seem to have any urgent need to establish priorities in foreign policy that go beyond those of fulfilling the stability criteria which are set out by the Treaties of the Union and get out of the profound crisis. Although sad, it is necessary to identify that: the internal devaluation that Spain registers in economic matters −the only way to recover competitiveness in the international markets− corresponds to another one for international affairs. 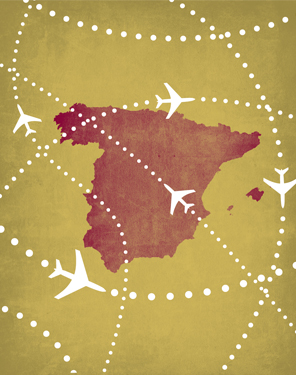 Consequently, Spain is not present but nor does anyone expect anything from it, until it recovers internally from its institutional identity and overcomes the strong economic depressive syndrome which it is suffering. The national energies, kidnapped by the urgency of the crisis, have not followed the rapid rhythm of transformations of certain areas of the planet, especially in Latin America or Asia. In the community of Spanish nations −as well as in Brazil− new realignments have taken place that will oblige Spain to establish very different relation policies from the traditional standardization and through these −maybe with a stronger link with the Pacific Alliance− try a new model of economic and cultural relations with Asia. In this sense, the essay of Josep Piqué, ex minister of Foreign Affairs with José María Aznar, who came from the private sector and who has gone back to it called Cambio de era. Un mundo en movimiento: de Norte a Sur y de Este a Oeste (Change of era. A world in movement: from North to South and from East to West) is the most lucid and comprehensive text about where Spain should go in the immediate future.

Fortunately, the process of marginalization of the Spanish State has been substituted by the vitality of the internationalization of the big Spanish companies. In Latin America the bankization of the subcontinent seems to be a mission for the big Spanish financial entities because of their knowledge of the markets of the subcontinent and particular identities that are very appropriate in this sector such as the language. In addition, the big infrastructures with competitive Spanish companies leave evidence of a highly valued Spanish presence in the region and, of course, less conflictive than those which operate in the energy sector that register very different types of difficulties. However, the cultural industries, more dependent on public support, are well below the expectations that are generated by a language community of nearly five hundred million.

The Spanish business potential already internationalized needs an effective protection from the State through bilateral and multilateral policies which are not sufficiently effective right now. What´s more, it could be said that in big conflicts in countries with a more unstable market situation, in political and judicial matters, Spanish companies have not received the necessary coverage. Not so much because of unwillingness of the Government of Madrid but because of its lack of definition regards the way of being and behaving in a Latin America which, as José Antonio Llorente has written (Supplement Negocios – El País of 13 October 2013), is now fragmented, in blocs with interests and unsynchronized purposes. In this new scenario, Spain seems to be disorientated and does not extract a relevant know how from the different Latin American Summits to reformulate its Latin American positioning.

The national energies, kidnapped by the crisis, have not followed the frenetic rhythm of transformations in specific areas of the planet, especially in Latin America and Asia

The realignment of relations with Latin America, the location of a connection channel with Asia and the recovery of the European role prior to the crisis, are in conclusion the three big challenges of Spanish foreign policy because in these territorial, cultural and economic areas the interests of our country can be identified and it must also revalidate its role with respect the States of north Africa. Spain is in a political and institutional stand by that has repercussions on its foreign policy which at the moment is going through the great phenomenon of the internationalization of our big companies. When these years are observed in perspective, we will recognize in this business pioneerism, in this entrepreneurial spirit the big asset of these last three five-year periods because it has substituted −in a different way from other historical eras− the weakness of the state and the political disorientation. From a Spain which has the potential to go out and do it with the recovery of a well-defined foreign policy which will be more sophisticated, complex and multilateral.