The eighth economy of the world: include to grow

IDEASUNO MagazineThe eighth economy of the world: include to grow

The economic potential of the Pacific Alliance and the speed at which it has developed a platform of cooperation amongst the countries that make it up has made of this bloc the eighth economy of the world, and that is no small thing.

We can also say that we represent the seventh exporting power on a global scale, reaching US$10 thousand of GDP per capita annual income on average, and 50% of the trade of the region, having received more than US$70 billion in foreign investment in 2012, which represents 41% of the total amount of the region.

Likewise, we have succeeded in assuring 100% of the tariff relief among our countries, as well as a trade agreement that includes several chapters of access to markets amongst which we find: rules of origin, trade facilitation, sanitary and phytosanitary measures, technical barriers, public purchases, cross-border services, telecommunications, maritime services, air services, electronic commerce, investment and dispute settlement mechanisms. All of them constitute a solid institutional and legal programme that assures the stability for the entry of more investments.

It is essential that the economic growth goes hand in hand with the implementation of policies articulated and orientated by results, aimed at reducing inequality and giving opportunities to the most vulnerable population

With these initiatives we are fostering larger regional exchanges and investments to improve our competitiveness in the interest of our populations as well as exploring commercial opportunities in high-growth regions and economies in the world, which will allow us to face the deep global crisis we are experiencing in a consolidated way. 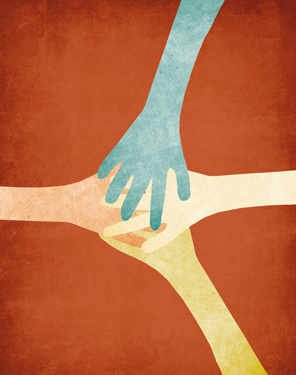 This is even more encouraging for Peru, instigator of this Alliance, after having experienced some very hard years. Today we reap the benefit of that Andean immigrant who arrived at the capital to build up his dreams with a street stall. Today we are the businessman who exports and provides jobs to other Peruvians. Today we are one of the fastest growing economies in the world of the last 20 years. Today we are already part of the eighth economy of the world.

However, economic growth does not guarantee by itself the social inclusion of the poorest and most vulnerable population who has not benefitted significantly in comparison with the rest of the population.

To continue reducing the poverty rate and to achieve social inclusion it is essential that the economic growth goes hand in hand with the implementation of policies articulated and orientated by results, aimed at reducing inequality and giving opportunities to the most vulnerable population. These policies are not just essential to assure that the excluded population can benefit from economic growth, but they also provide the bases for making this growth solid and sustainable.

Social inclusion enables us to improve the competitiveness of our human capital which sustains the productivity of the economy, invigorate and create new markets, generate a more attractive environment for private investment, achieve higher savings and investment rates, and generate tax revenues which support social expenditure (investment for social inclusion).

For the government it is a priority to keep this virtuous circle going, formed by growth and inclusion, thus implementing and strengthening the Policy for Development and Social Inclusion

The country we want is a prosperous country where all Peruvians, without distinction, can enjoy the benefits of growth in a dignified, secure and free way. For this reason, the strong commitment of our Government is to support social inclusion. We will achieve development only to the extent that more Peruvians integrate as full citizens to the progress of the country. It is not only a matter of growing to include but also of, including to continue growing.

For my Government, keeping this virtuous circle going is a priority. 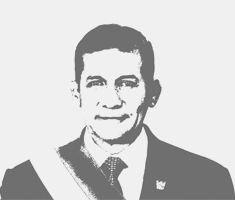 Ollanta Humala
President of the Republic of Peru
Constitutional President of the Republic of Peru and Founding President of the Peruvian Nationalist Party. He was Military Attaché in France and South Korea. He studied a Master’s Degree at the School of the National Center for Higher Studies (CAEN) on National Defence and he successfully completed a Master’s Degree in Political Science in the Pontifical Catholic University of Peru. President Ollanta Humala is one of the main leaders and promoters of the Pacific Alliance, along with Mexican, Colombian and Chilean Presidents, with whom he has helped this economic block become the eighth economy in the world.