The diplomacy of economy and communication

Henry Jon Temple, third viscount Palmerston (1784-1865) who served twice as British Prime Minister, was the politician who revealed the material content of the true objective of this soft power known as diplomacy. He said: “Great Britain has no eternal allies and no perpetual enemies, only interest that are eternal and perpetual”. It is hard to find a so pragmatic northern guide which sets out the direction of all countries’ foreign policy. It would be a policy of variable geometry where there is just, in a permanent and sustainable manner, many different interests. Values are put aside.

One of the activities specific to state sovereignty –foreign policy– which is neither decentralized nor delegated, even in countries in favour of infra-State authorities, has undergone a profound transformation to such an extent that diplomacy, which is a key instrument for foreign policy, has repeatedly been labelled as “new”. We cannot talk just about diplomacy, we should talk about a new diplomacy. What is this new diplomacy about? It consists on the collaborative management by institutions different from Government, although under its guidance, of the general interests, preferably economic interests, of companies whose welfare is State-controlled. This new diplomacy is, essentially, known as economic diplomacy, to which we must add the new communicational diplomacy.

The new diplomacy is no longer representative and conventional. It has now become an instrument for real politics by tightening its profiles

An example of the new procedures of the States’ foreign policy has recently emerged from the dangerous crisis in Ukraine and its confrontation with Russia. Organizations such as NATO, United Nations or the European Union itself haven’t thought for one moment about addressing the conflict between Kiev and Moscow from the point of view of the exercise of force but from the perspective of trying to reach diplomatic agreements to avoid the damaging consequences (especially economic and energetic consequences) of the annexation of the Crimean peninsula to Russia and the instability of Eastern Ukraine. A typical example of new diplomacy: the situation of Russian and Ukrainian communities and their confrontations does not seem relevant to this end and there is no deterrence capacity to prevent Putin from reviving the Russian imperial dream. Yet, there is a capacity to safeguard Europe’s energy interests and to offer the most convenient image about the conflict to the international public opinion through diplomatic communication techniques. In this case, this image would be Moscow’s regression to dangerous patterns of international behaviour associated with the former Union of Soviet Socialist Republics (USSR).

The new diplomacy is no longer representative and conventional. It has now become an instrument for real politics by tightening its profiles. In the European construction, the European External Action Service (EEAS), directly managed by the High Representative of the Union for Foreign Affairs and Security Policy, is being developed with energy. It is a common European diplomacy which employs hundreds of public officials from the EU itself or from diplomatic corps of the Member States and which has almost one hundred and fifty delegations or embassies and their respective ambassadors who replace Commission delegates and who, after the Treaty of Lisbon, have gone beyond their technical and economic tasks to exercise a more complete diplomatic activity where economic, financial and industrial issues are the most important ones. 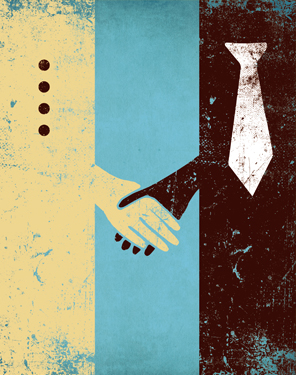 In Spain, Pedro Sánchez Pérez-Castejón, PhD in Economics and Professor of History of Economic Thinking and PSOE MP, has collaborated on the book La nueva diplomacia económica española (The new Spanish economic diplomacy) (Delta Publicaciones) which is a reference handbook as well as an essential tool to know the profiles of this new foreign policy depending on contemporary objectives which have nothing to do with war risks but with the management of financial, energy, industrial and technological interests, covering from the particular case of Spain to the general case of the European Union.

In the approach of this new diplomacy, according to a well-written script, the Government plays a leading role –without forgetting its involvement in the Union’s foreign policy– but it is assisted by the private collaboration (mainly represented by great companies who are crucial actors of what is called the “country brand”) and by “para-diplomatic” activities of the main autonomous communities and municipalities.

For this article, reference should be made to the work in which Pedro Sánchez Pérez-Castejón collaborated and which collects all the necessary information and details to gain a thorough understanding of the new architecture of the Spanish diplomacy, which is no different from diplomacy in other countries. Yet it is now pending for a regulatory structuring by the current Government through its draft law on Foreign Service, which should obtain a major inter-institutional consensus and meet the European Union’s requirements. However, it must also meet further requirements, since Spain has priority and privileged interests different from those of the EU: Latin American countries.

Nevertheless, the State’s economic interests (the companies and Public Administrations’ interests) abroad should be merged with communication. Nowadays, diplomacy means to create, transform, persuade and shape the State’s reputation as well as to fine-tune the “country brand”. We take up the old idea (but true nonetheless) of the communicational story that must go hand in hand with the history of the States’ foreign policy. Embassies should be considered as true channels for the emission of these messages from the State, well-connected communication centres with the previously-set interest groups and, at the same time, bodies responsible for the reception of functional information.

Let us move from attaché offices or Information Departments of the embassies (this concept should be seriously reviewed) to the configuration of authentic information emission and reception cells and, of course, of an efficient machinery of international reputation management, which unfortunately is a neglected aspect, or at least not optimized, not only by the Spanish Government, but also by other governments in the European Union.

The new (economic and communicational) diplomacy requires very serious approaches: should State civil servant bodies take the reins of the diplomacy management in positions involving major responsibility? On the contrary, should the politician’s diplomacy be seen as it often happens in the United States? What technical characteristics should be met by diplomats apart from the knowledge of foreign languages? Is the diplomats’ general training enough or should they have a more specialized training? These questions, among others, are posed in the context of the emergence of a new diplomacy or, in other words, the emergence of a new power of the State which, on certain occasions, is combined with other powers in order to share efforts in favour of the objectives that transcend (mainly in an economic field) the sphere of a country’s interests since they have an influence in an increasing number of regions in the world.