“The essence of knowledge is having it and applying it, or not having it and confessing your ignorance. In the current, complex world, interconnected, extraordinarily dynamic, the words of Confucius reveal how essential knowledge and intelligence are, to understand the paradigms that shape the new international order and meet the challenges it poses.

In this context, in the early 90s, as a consequence of the collapse of the Soviet Union, the universalization of technology and the globalization effect, a broad concept of threat, including economy and economic security, acquired greater significance as a basic element of national security. The shift of interstate tensions towards this field and the selection of the economic arena as the scenario to determine the influence capacity of nations have transformed this type of information into a strategic resource, as long as it is processed, spread and used appropriately.

States have created their own Economic Intelligence models according to their historical, political, social and cultural idiosyncrasies. The common element in all of them is the attempt to build a methodology that integrates all useful information at different organizational levels: government, businesses and individuals. This is the three-way convergence that Thomas Friedman mentioned in his essay regarding the flat world, whose consequences can be seen at the individual level, in the way in which businesses compete and the definition of countries regarding their economic and geopolitical priorities.

Economic Intelligence is not an end, but a means, that allows public policy to defend the national economic interests and ensure social cohesion

In the case of Spain, Law 11/2002, which regulates the National Intelligence Centre, establishes that the main mission of the Institution shall be to provide all necessary information and intelligence to the Government as to prevent any risk or threat that might jeopardize the independence and integrity of Spain, its national interests and the stability of the rule of law and its institutions. Furthermore, among the functions of the Centre, there is the protection and promotion of Spanish political, economic, industrial, commercial and strategic interests.

This way, the three different strands involved in Economic Intelligence are covered: the active dimension, regarding the obtainment of strategic information; the defensive or economy protection factor and the influence element, regarding the promotion of national economic interests.

As regards the first, the objective is to provide added value information to the Authorities, in a useful and timely manner, in order to reduce the uncertainty in the decision-making process, therefore enhancing the competitiveness of the Spanish economy.

CNI’s work in the field of economic protection involves monitoring strategic sectors, i.e., those that, affected by unlawful interference or actions, could adversely influence the proper functioning of the economy and even cause a situation of strategic dependence. For this reason, the institution tries to prevent and neutralize activities that could use the market mechanisms in a fraudulent manner or distortions of free competition, such as cyberattacks, economic and industrial espionage or money laundering, in particular as regards its connection with organized crime and terrorism. To this is added the monitoring of trade in dual-use and protection of classified information.

Special consideration should be given to the promotion of national economic interests. From this perspective, Economic Intelligence can become a kind of major influence policy, aimed at strengthening the State’s presence on the international arena, particularly in those territories with which Spain keeps historical ties, such as Latin America or the institutions to which it belongs, specifically in the European Union.
The certainty of having commercially competitive, financially viable and technologically advanced companies is a guarantee for the durability of freedom of action of a State. From this perspective, the CNI assists in supporting Spanish companies abroad. It is not a matter of rescuing economic protectionism mechanisms, but quite the opposite, ensuring that Spanish enterprises compete à armes égales on the international economic arena.

As shown by our neighboring countries, Intelligence Services can greatly contribute by facilitating their internationalization process, enhancing information protection, warning of political risks, ensuring the legality of international tenders and, ultimately, providing the necessary support for our companies to continue laying the foundations for our prosperity. The success of these actions depends on establishing a direct relationship between the CNI and the national enterprises, a public-private partnership based on the principle of mutual trust.

The CNI leads the Spanish public policies towards Economic Intelligence. The ultimate goal is to transform globalization challenges into opportunities and place our country at the forefront of the global economy. We know that we are not alone in this crucial challenge. It is a task we all need to fulfill. Let us be aware that reality actually changes when our perception of it changes. 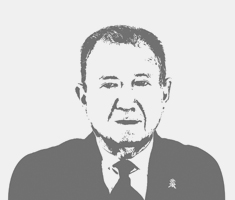