If we had to point out a beneficial effect of the crisis that has affected the most developed economies for the last eight years, it would be the boost it has entailed for the internationalization of corporations, which have sought in foreign markets a way out to compensate for the decline in domestic demand.

This process has contributed to the deepening of the economic relations of the European Union with Latin America, particularly in Spain, not only from a commercial point of view, but also as regards investment and the transfer of technology and knowledge.

In recent years, large Spanish corporations have increased their investing activity in Latin America, which has translated into an increasingly important growth for SMEs and a rise in the exports of goods.

Moreover, Latin America is one of the main destinations of the new, highly-qualified Spanish emigrants, which foster the transfer of technology and knowledge, essential to generate employment and enhance the productive network supporting social inclusion and domestic development.

Latin America is very heterogeneous, but there is a common denominator in all countries, the cultural and social ties that unite them, and which they largely share with the countries across the Atlantic

This whole economic and social process has a dual nature, since Latin American corporations and professionals now have in the EU one of its main destinations for development and Spain as the best possible bridge to achieve it.

Latin America is very heterogeneous, but there is a common denominator in all countries, the cultural and social ties that unite them and which they largely share with the countries across the Atlantic. Cultural and social values and approaches that “transoceanic” professionals and entrepreneurs detect on both sides of the ocean and which constitute the most solid base on which to develop economic relations.

Obviously, some countries pose greater political risks, less legal protection for property rights and investments and less developed infrastructures, but all hurdles can be overcome. Meanwhile, the convergence in “shared values” must continue and keep growing.

The administrations and civil society must meet the challenge of promoting the economic and business relations between the EU and Latin America to foster an enhanced development which shall entail greater prosperity on both sides of the Atlantic.

It is a matter of improving the economic relations of both regions, increasing the dialogue and working to remove obstacles and, to this end, it will be essential to incorporate SMEs and micro-enterprises, a key factor for the production network of both regions as well as a driver of development.

However, SMEs carrying out trade activities in both regions are a minority, since they need to face significant structural barriers in order to engage in international transactions and this is a problem despite the fact that the size of the markets, their capacity to innovate and their flexibility could provide significant advantages to them.

In order to overcome these hurdles and offer enhanced transatlantic trade and investment opportunities for SMEs it is necessary to improve the institutional counseling and support framework that they require to address processes that are by no means simple.

On a different note, it is crucial to have adequate financial tools, such as credit facilities, working capitals and investment loans as well as banks and business partners willing to finance companies throughout the whole economic cycle.

The first option for SMEs to penetrate the international markets is to participate in the value chains of large companies, which support the former and provide funding to help them grow, as well as training and the transfer of knowledge. These large corporations, in turn, can benefit from the development of local SMEs that offer tailored products and services and have experience in the region.

But it is also necessary to support business cooperation systems at all stages: finding partners, establishing alliances and monitoring the process. There are countless possibilities, from the upper level, which would involve the merger of several companies, to central purchasing, use of complementarities and collaboration in trade, innovation and distribution projects.

In the current context we have digital tools, unthinkable twenty years ago, which close gaps at low costs and greatly contribute to the strengthening of the economic and business relations between two continents.

Digital platforms must be a key element to enhance the financial and trade flows, reducing the costs and uncertainties of international expansions.

And they should be used to facilitate agreements, explore markets, share knowledge and training, enhance competitiveness and, in short, increase and expand the value of SMEs, which have in their hands much of the social development potential. 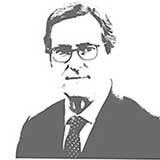 Antonio Garamendi
President of the Spanish Confederation of Business Organizations
A Law graduate from Deusto University, Antonio Garamendi has been served as director of Babcock & Wilcox Española S.A; Albura S.A; Red Eléctrica de España S.A; and Tubos Reunidos S.A, as well as vice president of Entel Ibai S.A. At present, his business activity focuses on the metal, construction, insurance, and hospitality industries. He is an independent director and vice president of Aenor Internacional. Garamendi is also the current president of the AYUDARE Foundation and a member of the Foundation for Help with Drug Addiction (Fundación de Ayuda contra la Drogadicción, FAD). He is also on the Advisory Council for International Chair of Women, Business and Sport at UCAM University and has been a member of the Guggenheim Museum Board of Trustees.