Win the lawsuit and lose your reputation?

As the saying goes, “may you have lawsuits and win them.” This proverb says much about the various problems that might result from a favorable judgment in a court proceeding. If this saying was relevant in the past, it is even more so today now that natural or legal entities and their attorneys –either claimants, defendants, plaintiffs or respondents– may not be aware that court proceedings –known as lawsuits– can relish in or suffer from great publicity. Lawsuits with elements of public notoriety inevitably attract media interest and affect public opinion.

The concept of a “parallel trial” –one that takes place outside the courts and on the margins of any legal procedure– is not new, but the transformation of citizens into opinion leaders through social media networks can cause a lawsuit with potentially interesting content to become a time bomb for both parties in the dispute; its media coverage might be affected by the “set of intangibles” that, according to Juan Manuel Mora, comprises the reputations of legal and natural entities.

Parallel trials can become ticking time bombs against the “set of intangibles” that comprise the reputations of legal and natural entities, taking part in a lawsuit

French President Georges Clemenceau (1841-1929) warned that trials are “too important” to be left merely in the hands of attorneys. As both an attorney and a journalist with more than 40 years of experience, I must admit the statement is now more relevant and appropriate than ever. Regardless of the nature of the lawsuit, the parties’ interests are not the only things at stake; so are the intangibles that shape their reputations. Too often, the defense or prosecution involved in a judicial process feeds off not only the jurisdictional body, but also off public opinion, where a favorable judgment can go on to lose relevance if prior reputation loss has been great enough.

The link between a lawsuit, the media and public opinion is a variable all attorneys should bear in mind to establish professional channels of communication that, far from ignoring public interest in the process, meet its demands. Here is where the possibility of communication experts joining the legal team with the purpose of incorporating a multidisciplinary approach for the client’s defense comes in, aimed at also protecting their image and reputation vis-à-vis stakeholders and public opinion. Furthermore, assuming the independence and impartiality of judges in a democratic system, the social climate resulting from a notorious lawsuit could permeate the professional opinion of judges to the point of influencing their decisions.

Although reputational risk is a variable that should be considered in all processes, it becomes increasingly important in the criminal and commercial domains, since it affects or may affect intangibles that are difficult to restore if they deteriorate as the result of a judicial proceeding. The advice given by a communications professional to the attorney in charge of the proceedings would aim to support the effective development of the judicial process by providing reliable and accessible information and clarifying ambiguous data, as well as explaining the steps determining the litigation proceeding.

Often enough, attorneys feel capable of acting as spokespersons and media partners. However, the reality is that this is not always successfully realized, and in addition to not being able to clarify the issues, on many occasions their interventions end up undermining their own image, which must also be protected in order to defend their clients’ interests. Separating the roles of attorney and spokesperson in front of the media is the first decision to be made in a notorious lawsuit. Based on that decision, a communications plan must be developed –even silence must be planned– to be implemented at the same pace as the proceedings itself. 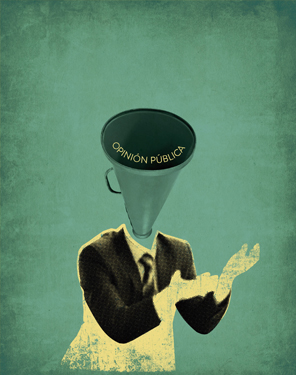 Communications in a publicly-relevant lawsuit must overcome existing barriers that radically distance the legal-judicial field from the media and public arenas. In the face of the judicial discretion imperative that penetrates every judicial procedure –which no longer makes sense in an extremely mediatized society– certain legal elements of transparency must be introduced which do not fall into illegality (investigation secrecy, for instance) since, normally, conceptual mistakes and data insufficiency go along with “leaks,” tools used for, on many an occasion, insidious communication tactics. In most cases, silence is not profitable.

Overcoming this obligation –more inertial than enforceable, according to the rules– with which judges and attorneys identify themselves in a rather unrealistic way, must go hand in hand with an extraordinary educational effort. The legal field is technical by nature, making use of very precise and accurate language, whereas the language used in the media and by the general public is quite colloquial, simple and accessible. It is thus necessary to “translate” the technical vocabulary into more common language in order to achieve a good understanding of the professional mechanisms used in the process.

Attorneys –in addition to breaking the discretion rule and adapting to a pedagogical language developed and planned by communication professionals who collaborate with them in the process– need to completely change their perception of journalists and the media. The traditional trend of considering them “opponents” and, therefore, enemy agents to their cause, must be reversed and transformed. Journalists and media can become great allies as long as a friendly strategy is adopted and, far from concealing the details of a lawsuit from them, these are given to them with a didactic intention. There are no longer traditional journalists specialized in court matters, save a handful of exceptions, at least in Spain, so no assumptions should be made as to whether media professionals have specific technical knowledge. Here is where the necessity of avoiding media disasters resulting from a confusing explanation of judicial cases arises.

Further articles in this issue will address various aspects of communication and lawsuits as a binomial that imposes the contemporaneity of an interconnected society that has access, almost in an osmotic process, to all kinds of informative content. The real challenge is that while we can obtain a judgment favorable to the client’s interests, it results in a pyrrhic victory if it jeopardizes one’s reputation. On the other hand, an excess of information may cause an overlap of events, whereas the collective memory is fragile. A lawsuit that starts with much media noise –and negative media coverage for one of the parties– can completely fade after a few days or months. A communications professional, together with the attorney and in line with the legal strategy to defend the client’s interests, must be, as Juan Manuel Mora once said, a guardian of character who “promotes a shared culture which protects, preserves, qualifies and increases reputation.”