Business associations face the challenge of independence and legitimacy

IDEASUNO MagazineBusiness associations face the challenge of independence and legitimacy

Nowadays it is very difficult, if not impossible, to think of a business sector in the world where the different players are not organized into some sort of association. This is true for more traditional and recognized sectors to those linked to regulated industries and even to the most recently created. All of these have the same goal and purpose, which is simply to safeguard “the natural interests of their members.”

Companies started to realize that, although they could continue to compete fiercely in the commercial field, it was convenient to have aligned communication strategies for the industry as a whole

Until about 10 years ago, Chilean and international public opinion shared the assumption that strong competition between companies is enough incentive to generate strong markets. In that scenario, each company had its own commercial strategies and communications it used to compete. But times have changed. Consumers realized that the market was not perfect and companies did not always act fairly. This understanding began the well-known wave of social criticism that has led to surveys showing very low levels of trust in companies and entrepreneurs.

In turn, companies started to realize that, although they could continue to compete fiercely in the commercial field, it was convenient to have aligned communication strategies for the industry as a whole, as this was the only way to deal with the barrage of criticism. This once again inspired companies to form associations, giving professional associations responsibility for the relationship with various stakeholders.

The problem is that consumers and public opinion quickly assumed these associations had self-interested reasons for existing. When the Association of Food Companies complains about the new labeling rules, does it consider the consumers? Who does the Association of Banks defend in the regulation of express consent in financial agreements? The response is obvious, you might tell me: they defend the interests of their companies. Well, that is precisely the problem when creating good public policies, as sector authorities and public opinion begin with the assumption that these associations are designed to defend corporate positions and not necessarily the common good of society.

Is this an exaggerated opinion? Not if we are guided by what is said in the Bicentennial survey by the Pontifical Catholic University of Chile. When Chileans were asked about their opinion of “the banks,” a 62 percent majority declared little or no trust in them. However, when asked about the bank where they are a “customer,” their opinion reversed, with more than 60 percent declaring they had a lot of trust or quite a lot of trust. A similar bipolarity occurs when asked if they trust “companies,” with only 16 percent saying yes, compared to their trust in “the company where you work,” with 72 percent saying yes. Extrapolating this evidence, one could conclude that Chileans tend to distrust the opinions coming from groups of companies, which certainly includes trade associations.

It is a fact that associations face a complex scenario of social legitimacy. In Chile and around the world, we are facing an increasingly demanding social environment for companies. The standards required for transparency, free competition and sustainability have increased. Therefore, it seems inevitable trade associations redesign the way they are structured, as well as assess the public signals sent regarding the composition of the boards of those associations, especially those representing industries that provide public services with high social impact.

In those cases, it seems advisable for associations to replicate a practice used by business associations in OECD countries: that the articles of association of those organizations require boards made up not only of directors representing the companies (typically their CEOs, key executives, directors and/or controllers), but also incorporate independent directors: professionals with no employment or financial connection to any of the companies. These should be people with sufficient public legitimacy and who, when faced with deciding the association’s position on a new regulation, have no considerations other than their professional expertise, personal reputation and experience as a user. This would allow associations to add greater representation and legitimacy to their board’s recommendations in response to these new regulations.

Only trade associations capable of demonstrating their independence of thought to the public will have legitimacy when discussing their opinions and proposals. 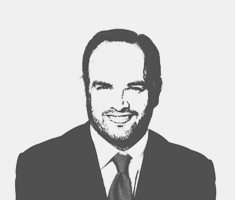 Alberto Etchegaray
President of BOARD / Chile
In addition to his position as president of BOARD, Corporate Governance Center at the Adolfo Ibáñez University, Etchegaray is also a counsel in the Garrigues Chile law firm; director of Compass Chile, general administrator of Funds; member of the Capital Markets Advisory Council of the Ministry of Finance; member of the Council of Self-Regulation for the Mutual Funds Industry in Chile; and founding partner and director of InBest, a nonprofit organization designed to promote the Chilean capital market. He was previously puperintendent of Securities and Insurance and General Secretary of Alberto Hurtado University. He holds a law degree from Diego Portales University and has a master’s in Public Policy from Georgetown University. [Chile] @aetchegaray