Mankind is confronted by profound changes: in our planet, in how societies organize and function, in increasingly worn-out institutions, in the possibilities of science and technology. Even though some of those changes could be positively transformative, the dizzying—and seemingly accelerating—pace of change is overwhelming our collective capacity to cope. Challenges like climate change, mass migration, terrorism and human trafficking, whose very natures require global action, are colliding with a distribution of power, institutions and practices that were built for a very different world.

Unfortunately, the consequence is that the many decades–long era of ubiquitous global growth, human development and prosperity is fading, replaced by one of stagnation, conflict and almost medieval conditions in some parts of the globe. The sense of hopeful globalism that characterized the turn of the century has all but given way to resurgent, inward-looking nationalism.

The many decades–long era of ubiquitous global growth, human development and prosperity is fading, replaced by one of stagnation, conflict and almost medieval conditions in some parts of the globe

Arguably, there are at least five main drivers of the evolving scenario:

• The likelihood the global economy is slowing due to structural factors, thereby confounding expectations of the emerging middle classes in countries like Brazil and China, while at the same time condemning industrial country middle classes to stagnation.

• The unprecedented collapse of the political center in most democracies, reflecting the growing sense among voters that they are being disenfranchised.1

• The reemergence of war as an accepted way to advance national interests, partly because of the unwillingness of the permanent members of the United Nations Security Council to accept the principles and disciplines of the U.N. Charter.

• The failure of democratically-elected leaders in too many countries—but especially in emerging democracies—to adhere to ethical standards that justify the trust of voters and create a basis for sustainable political evolution.2

Each of these points is controversial, but the failure of political leaders to make democracy work might be the most important. Recent data suggests that leaders in emerging market countries considered to be “free” tend to be more corrupt and less trusted than their autocratic counterparts. The obvious question: why bother with the costs of democracy if the benefits are stolen? Further, if “democracy” was supposed to be a key underpinning of the new world order—and if it is failing—what next?

All of this can be put another way. Neither industrial nor emerging democracies are delivering for their constituents. As a result, across countries and cultures, significant numbers of voters are embracing populist and nationalist solutions or endorsing “strong,” if undemocratic, leaders. This story cannot end well.

Of course, there could be alternative futures. Are there leaders, in politics or society at large, who are willing to think differently and reinvent how democracy works? Is it possible to leverage new information technologies to create relationships between citizens and their elected representatives, reducing the widening democratic deficit? Can technology make government and governance more transparent, restoring citizens’ trust in politicians? Can innovative, ethical leaders working outside governmental frameworks create positive political change that leads to the renewal of antique political structures and practices?

If we continue on the current path, we will deserve whatever history dishes out: good, bad or ugly

Unfortunately, there is little reason to be optimistic. American author Mark Twain supposedly said “History never repeats itself, but it often rhymes,” and there is much in the current environment that feels like (whether or not it rhymes) the environment that turned the 1914 assassination of the Austrian Archduke into a global conflict.

But, that’s the point. If we continue on the current path, we will deserve whatever history dishes out: good, bad or ugly. 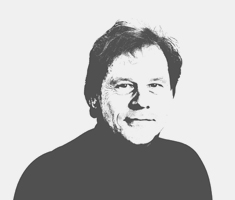 Alan Stoga
President of Tällberg Foundation / USA
He works in the area of business strategy, as well as being an entrepreneur. Stoga has extensive experience in communications and public relations, corporate consulting, geo-politics, banking and governance. He is currently president (executive) of the Tällberg Foundation, senior consultant at Kissinger Associates, president of Zemi Communications, L.L.C. and president (nonexecutive) of the Tinker Foundation. Previously, Stoga founded a private risk capital fund, was managing director of Kissinger Associates chief economist of the National Bipartisan Commission on Central America, managed the national risk management activities at the First National Bank of Chicago and worked as an economist in the U.S. Treasury. [USA]