When the public pendulum swings…

We are almost at the end of 2016 and I think it would be realistic to say we are seeing the culmination of another year full of surprises in the world of politics, economy and society. This has been the case since at least 2008, which saw the start of the biggest international financial crisis since the end of the World War II.

In this time, the world has witnessed very diverse and intense processes of political, economic and social change that have once again demonstrated the intimate relationship between the three areas. I am one of those who believe all political action is motivated by society and generates an economic outcome, which in turn, conditions politics due to its effect on society. We therefore have a vicious cycle, intense and unstoppable, in the middle of which we have interactions between the people and, of course, their political, economic and social leaders.

As societies have gained greater access to information, the public has been developing greater awareness about its rights and duties, both individual and collective

“What is happening to the world? This has never been seen before!” This is a question and a response I have heard many times over these years in response to different issues and situations people have experienced firsthand, or to which they have been witness thanks, largely, to technological advances and an increasingly capable, fast and critical media that provides information, almost in real time, to all households with facts and opinions on each issue reported. Given this, on more than one occasion I have asked myself: “Why?”

I do not believe I am, and nor do I intend to be, the bearer of truth, but rather provide only my modest opinion and curiosity in the matter. I am convinced the type of changes and challenges faced by people nowadays and, perhaps even more importantly, in the future, has been and are being largely shaped by the incredible phenomenon of the information society and all of the individual rights that have come with it. As societies have gained greater access to information, the public has been developing greater awareness about its rights and duties, both individual and collective. With this, it has also been conditioning the behavior of their ruling classes in the political, economic and social spheres around a concept that was always there and which, today, has become essential: transparency.

There is no doubt that, across the planet, all societies, regardless of their level of development, are demanding more information and more transparency. Even in the most closed and isolated communities we can find some progress in terms of access to information and the change this has generated.

With these general ideas in mind, I wanted to focus on a phenomenon that has been of particular interest to me. I am referring to the development of trends and governments that, taking the ideas of more transparency and information in the hands of the people, have developed political, economic and social agendas based on populism. They are proposing, to a greater or lesser extent and of course with different nuances and intensities, a resurgence of concepts such as “the class struggle,” “savage capitalism,” “the pillaging of resources in the name of free trade,” “collective ownership over private property” and others, which, due to space limitations, I will not list and analyze. I find it fascinating, albeit worrying at the same time, to see how, in light of the legitimate demands of the people for more information and therefore more transparency, many populist movements across the five continents, left or right wing; have interpreted “transparency” as a “new class struggle.” It is also worth noting that they have also given a new meaning and scope to the concept of corruption in the name of transparency.

It is true that in the area of resource management, both public and private, transparency works to counter corruption. There is no doubt about that. However, populist movements have “extended” the definition and scope of corruption in order to justify policies and agendas against private property, freedom of expression and political ideas. These populist movements have interpreted transparency in public and private management as “popular economy and people power” to the point that, in some political regimes, anything that does not fit with, criticizes or confronts what the populist ruling classes understand to be “transparent management for the popular good” is plain and simple corruption. And so, in the name of people who demand transparency, they have attacked and hindered, to unheard-of degrees, those who, I repeat, have not fit into or have criticized or confronted their ideas of transparency. I do not think it would be too difficult to identify, in our own Latin America (to mention just one region of the world), examples of this political, economic and social phenomenon without needing to mention them specifically. Let every reader draw their own conclusions.

However, just as I am a believer that, in the name of transparency, the populists have generated truly transformative—though bad in my opinion—political, economic and social processes in the populations that they have been elected to lead, I also believe that, fortunately, these societies are based on information, and therefore transparency, allowing the same public, which is increasingly informed and has greater knowledge and critical awareness, to reverse “the public pendulum.”

Until now, it would seem policies have materialized in both the left and right wings of political thinking that give the impression of having halted private initiative, world trade and competition between markets, almost demonizing, on some occasions, public management as a symbol of inefficiency and a source of corruption, all in the name of a “more regulated and supervised” world. In this world, public and private activity must be put to the test to guarantee the public “more transparency and less corruption,” given that it cannot be assumed a priori that all public and private activity is transparent, but rather potentially corrupt if not regulated and supervised. The picture I paint sounds rather horrific, but there are many examples of this across the five continents at all levels of political, economic and social life.

There are many examples of this across the five continents at all levels of political, economic and social life

However, I believe that in response to these types of situations, an opposite and perhaps doubly intense phenomenon is beginning to take place, hence my idea of a “public pendulum.” People are realizing that transparency in management, both public and private, is not the same as the popular economy, but signifies a good, optimal and responsible management of resources, whether public or private. Thanks to this, each citizen can have the opportunity, under equal conditions, to develop their own abilities and initiatives. We are also starting to see the same ruling classes who initially “interpreted” what information society represented for their societies and people in terms of transparency once again ignore, underestimate, misinterpret and even confront what transparency in public and private management means for their future societies. I believe that, in this case, it would be relatively easy to identify some of these political phenomena, not only in Latin America but also in “old Europe,” for example, without needing to name names all.

In short, I am of the modest opinion that “the public pendulum” is swinging in, which is once again the product of the disconnection between the ruling classes in politics, the economy and society and their people—people who, insofar as they have more access to information, develop a greater capacity for constructive criticism. This, I trust, will make them demand more opportunities and rights to develop their own capabilities as individuals and through that, to progress in the formation of increasingly open, free, tolerant and less aggressive societies. Over time, these new societies will require smaller and less interventionist governments and enjoy economies that are more open, free and less regulated, in which greater trade is a reality. I believe that at this point, the world will once again manage to overcome the apathy and incapacity from which we have suffered for almost a decade, to foster our own economic and social growth. 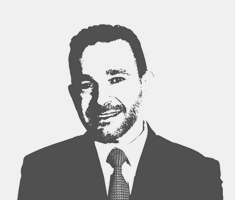 Francisco J. Álvarez De Soto
Managing partner of ALVES & Co. ABOGADOS / ATTORNEYS AT LAW / Panama
Álvarez de Soto founded the firm ALVES & Co. ABOGADOS / ATTORNEYS AT LAW in 2002, and has been its managing partner since 2014. From 2003 to 2009 he was the Legal and Regulatory executive director for Cable & Wireless Panamá, S.A. In the Ministry of Commerce and Industry, he served in a variety of roles, including special ambassador for International Commercial Affairs, adviser, vice-minister and head of International Trade Negotiations. In the Ministry of Foreign Affairs, he served as general director of International Economic Affairs, general secretary, vice-minister and minister of Foreign Affairs. He earned a degree in Political Economy and Political Analysis from Tulane University and his law degree from Loyola University. [Panama] @AlvarezdeSotoFJ