Challenges for the labor market

From east to west, as the sun moves across the sky, the COVID-19 pandemic has spread around the world. Millions of people have been affected and thousands left dead in the wake of a disease for which there is still no vaccine and could therefore flare up again at any time. Almost every society and government opted for public lockdown as the best way to deal with it, in the hope of curbing the spread and reducing the death rate. But this also meant putting the economy in deep freeze. Production was halted and work stopped on everything not considered essential for the population. Furthermore, the lockdown and economic paralysis were not short-term either but rather, to one extent or another, lasted for close on three months. So long in fact that a significant number of companies and workers have lost business and their jobs, leaving an alarming increase in unemployment behind the pandemic alongside a long list of deaths.

According to estimates from the International Labor Organization, a 6.7% global decrease in employment can be expected in the second quarter of 2020, equivalent to 195 million full-time jobs1. In Spain alone, the Social Security figures show that over 700,000 jobs have been lost since the pandemic started and close on three million workers are on employment contract suspensions or reduced

“A 6.7% global decrease in employment can be expected in the second quarter of 2020, equivalent to 195 million full-time jobs”

working hours, the so-called ERTEs (temporary redundancy plans)2. This represents a labor crisis comparable to the one experienced after the 2008 economic crisis and calls on us as a society to reflect on the impending unemployment.

To begin with, one of the lessons we can take away from this pandemic in terms of its effect on the labor market is that the most vulnerable workers are those who have suffered the worst consequences of the economic shut-down. Temporary workers have seen their contracts terminated or not renewed; informal workers have had to decide between their health and their survival given that, with no social safety net whatsoever, the lockdown and no work represents a complete lack of income for them. For this reason, making progress on the formalization of employment and its stability are essential factors in the post-COVID-19 world. In Spain, that means putting an end once and for all to the excessive temporary employment rate in our labor market. In the world at large, it means making progress on the concept of decent work enshrined as Goal 8 of the Sustainable Development Goals.

A second lesson to be learned is the need for a strong Welfare State. Not only because the magnitude of the pandemic and the lockdown have seriously tested the robust nature of our healthcare and education systems, key parts of any Welfare State, but also because it has been necessary to provide incomes to all those without work or in work but on furlough due to the coma induced on business activity. The first step to be taken in Spain was to broaden the unemployment safety net (the number of recipients in May reached 5.9 million and cost over 5.1 billion euros3) and then the Minimum Subsistence Income was approved, a new Social Security benefit to cover those people with no other form of income4. However, this is just one national example of something that – when considering what the post-COVID-19 world should be like – would have to be the general rule for tackling unemployment: expanding social protection to cover everyone in such a way that a lack of employment does not mean a lack of income with which to live a decent life.

The third lesson to learn from the pandemic in the world of employment has been a kind of synergy between technological work and human work. Whereas the two things seemed mutually exclusive before the spread of COVID-19 – to the extent that we were asking ourselves how many human jobs would be destroyed by the unstoppable march of technology, the pandemic has revealed that both are absolutely necessary.

Technology has enabled a certain degree of business activity and public service to be maintained that would have had to stop were remote working methods not used, especially working from home; while the human work in care environments (socio-healthcare professionals, jobs in the family home, looking after children, those in long-term care and the elderly) has been essential to preserving the life, health and well-being of the sick and citizens in lockdown. Stark contrasts can be found on both sides, however, such as the digital gaps or precarious and underpaid employment that would have to be remedied urgently. One certainty has been revealed about the post-COVID-19 world: technological progress and human care are two fertile sources of job creation. They are jobs for which the working population will need training; digital skills and/or care skills in this case. This is the third factor to highlight looking forward: the absolute and pressing need for better education and more and better training for workers so they can harness real opportunities to access jobs potentially created by the technology revolution and the care economy. 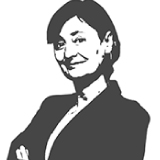 Luz Rodríguez
Doctor of Law and Lead Professor of Labor and Social Security Law at the University of Castilla La Mancha
She currently leads a research group on the impact of technology on the labor market and is a cotec foundation expert on decent work and economic development. former State Secretary for employment. [Spain]