IDEASUNO MagazineA training policy for after covid (and beyond)

Within a little over a decade, the youngest generations of advanced societies have had to face two crises that jeopardize their employability and capacity to build ties with their community through trust and respect. The figures coming out of Spain from the current COVID-19 pandemic are distressing: an unemployment rate of 15% (almost four million people), almost 90% of job losses over these weeks involved temporary contracts, and crucial sectors such as hospitality and tourism are suffering the worst impacts of the onslaught from a microscopic virus.

The pandemic has accelerated changes that were already on the way. In recent years, developed societies have been witnessing considerable economic and social upheaval. What the economist Richard Baldwin has called “globotics” – a cross between globalization and technological revolution – is leading to the accelerated disappearance of tasks associated with mid-level skills and salaries in favor of those at the two extremes. Fear is spreading of mass unemployment, increased job insecurity and greater inequality. The threat of a widespread technological dystopia and distrust in the ability of our representatives to deal with it are splitting the seams of the social contract.

It would be just as foolish as egotistical to underestimate public fears. We know that innovations have always helped raise our wellbeing and that there is no reason to expect mass unemployment. However, we also know that we will all be dead eventually. We are suffering the costs of adjustment right now, at this very moment, and some far more than others.

Among the tools available to public and private policies for dealing with this challenge, training plays a crucial role. The fundamental question we must ask ourselves is clear: are current training policies sufficiently effective to ensure that workers and machines can be allies instead of adversaries? As things stand today, the answer in Spain is “no”. Half of all unemployed (more than 1.6 million people) have a low level of education, as is the case for one-third of all people in employment (more than 6.2 million). Increasing the education level of our workers is therefore an essential requirement for achieving a less dysfunctional labor market and, at the same time, increased social well-being and sustainable public policies.

A public-private training strategy truly committed to employability, competitiveness and wealth creation over the coming decades will need to pay basic attention to the development of digital skills and the economic sectors of greatest potential.

First of all, it is important to stress that Spain stands below the European average in terms of the proportion of its population with basic digital skills. This problem is especially visible in small businesses. The fact that barely 6% of companies with less than 10 employees are engaged in e-commerce points to the seriousness of the situation. We have enormous room for improvement in the training of workers to use those technologies that are already defining the well-being potential of a society in 2020.

Furthermore, the exponential growth in the care sector of such an ageing country as Spain; the necessary reconversion of tourism towards higher quality standards; the promotion of greener, more digital and more international industry; and more agile and efficient public administration services make the provision of training to the workforce in these sectors inevitable if we wish to guarantee a switch from poor qualifications to new skills.

This urgent attention to digital skills and requalification in strategic sectors should be stable, agile and coherent with all the other efforts rolled out by public and private stakeholders. Dialogue and consensus, guarantees on legitimacy and effectiveness, must therefore be present from day one when designing these policies. In terms of implementation, we must also ensure ourselves that suitable mechanisms are in place to guarantee transparent and effective assessment. Finally, the commitment to technology, the promotion of entrepreneurship and the social economy, and the use of innovative methods (e.g. participatory actionoriented training or bootcamp programs) will have to be included across the board in any effort in this regard.

“This urgent attention to digital skills and re-qualification in strategic sectors should be stable, agile and coherent with all the other efforts rolled out by public and private stakeholders”

We urgently need stable, flexible and coherent policies and strategies that allow companies, public authorities and civil society to harness these technological forces in our favor. Training policy plays a central role in that effort. It is not merely a question of accompanying the most vulnerable citizens through a process of transition. It is a question of enabling the digitalization process itself: only when the majority of society benefits from the digital revolution will we prevent social minorities capable of preventing its clear advantages from being obtained. Let’s overcome the false dilemma between equality and efficiency. 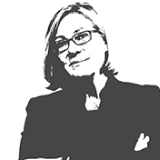 María Jesús Pérez
Managing Director of ADAMS Formación and President of the Foundation for Training and Employment Quality and Innovation
After practicing law, she took on a management role at ADAMS Formación in 1989, a family business with over 400 employees in nine cities in Spain and Mexico. With a commitment to equality, she has led various initiatives in defense of women’s rights and the eradication of gender violence. She was named Businesswoman of the Year 2009 by the Spanish Association of Female Business Leaders of Madrid and included among the Top 100 Female Leaders in Spain in 2013, 2018 and 2019. [Spain]