Now that we are heading towards a new normal, the pandemic suffered in every inhabited corner of the planet has left a trail of grief for those no longer with us, uncertainty about the future, lessons learned through trial and error, and the threat of a long shadow, like that cast by the cypress trees in the book by Miguel Delibes: the risk of weakening the pact between Man and Nature in a kind of perverted reorganization of priorities that are pushing a few to believe, naively, that the economic reconstruction process is incompatible with environmental principles.

We have been given a crash course in heuristics because we have discovered unprecedented scenarios and we have done it together, at the same time. Whether we like it or not, these circumstances bring us all together. We have also discovered that we are gregarious beings and that, when we want to overcome adversity, we are capable of pulling in the same direction; in other words, that we are not so distant from our ancestors.

Luckily, this crash course has led us to rediscover our respect for ourselves: for our health and well-being, for others, for the common good and for the environment. We have breathed clean air in our cities, we have appreciated public spaces because we were deprived of them, we have wanted to walk through a forest or along a beach more than ever… we have been surprised to see from within lockdown how an absence of nature affected us more than we thought.

We know that we are going to experience significant transformations over the coming years. The question is whether they will head in the right direction. Will they be green and innovative? We have an opportunity to harness this crisis (this one is equally conducive to such action as the previous or the next to arrive) to accelerate change, anticipate the agenda and tackle important shifts right now using strategic methods rather than short-term-focused maneuvering.

If we fail, we run the risk of returning to square one and perpetuating the systemic faults we have been dragging with us for decades; the faults that, to a certain extent, have brought us to this point of no return. One of the clearest examples of this was the short time spent at COP25 on the majority of issues proposed by its round of negotiations to make us realize that paralysis, and even back-steps, always await us just around the corner. We must remain vigilant.

Let us then engage in far-reaching transformations with already agreed agendas, such as the recent Green New Deal in Europe; a genuine Green Deal that is more necessary now than ever before in redesigning a European economy based on innovation, decarbonization, efficiency, competitiveness, digitalization and sustainability.

To ensure this New Green Deal from the President of the European Commission, Ursula von der Leyen, ends up being more than just pie in the sky, as was the case in the past with a number of similar proposals, it has already started to produce a number of useful tools, such as a commitment by the new Climate Act, the long-term strategy for climate neutrality in 2050 (March 2020), the adoption of an Action Plan for the Circular Economy (March 2020) and the launch of two absolutely necessary strategies on Biodiversity and Sustainable Food (both in May 2020).

It is pleasing to see how Europe seeks to consolidate the circular economy as the new paradigm to enable sustainable growth capable of generating wealth, green jobs and competitiveness while also reducing its carbon footprint and impacts on the environment.

Both eco-design and the sustainable production of goods and services in industry will be priorities here, but no less so will be the ability to properly manage the waste produced after consuming those goods and services. There is good reason why this new economic model is called ‘circular’.

Fortunately, the general regulatory and strategic framework being designed in the European Union is being reflected in national environments. It would not work otherwise. The recent approval by the Spanish Council of Ministers of the future Spanish Climate Change and Energy Transition Act and the new Spanish Circular Economy Strategy, “Circular Spain 2030”, are two fine examples of this.

Both of them contain ambitious but necessary targets, such as reducing CO2 emissions to curb climate change, transforming the energy system

by committing to renewable sources, reducing waste production by 15% (on 2010 figures), improving efficiency in the use of water and minimizing food waste.

Furthermore, and no less importantly, there seems to be consensus around these proposals and targets. The World Economic Forum, the European Environment Agency and the Ellen MacArthur Foundation are just three of the many institutions that recognize and defend the need to transition over to a more sustainable and innovative circular economy, in which the companies that make up the private sector must be fully integrated and committed.

It is here where those responsible for the management systems that promote recycling, such as Ecoembes in Spain for packaging waste, have a major challenge to face because we work with all the stakeholders involved; from the companies that bring packaging to market and accept their legal responsibility to fund the cost of their recycling after they have been used to the local authorities that are responsible for collecting the waste in our towns and cities. More importantly, we also work with citizens. Normal people who are showing an environmental commitment that grows in strength every day by separating their waste so it can be recycled or not leaving it in natural environments, thereby minimizing its environmental impact.

We are going to live in this Europe we are rebuilding for the rest of the 21st century at least. The decisions we make today will shape the society in which our children and grandchildren grow up. And that is no small task. Now is not the time to look the other way but rather to get on with cooking the necessary changes we already had on the back burner and serve them up to a customer who has increasing demands about an unwavering commitment to the environment – society – in a restaurant we all own a part of and can no longer cope on its own – the planet. 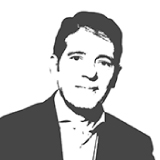 Oscar Martín
Managing Director of Ecoembes
The non-profit environmental organization that promotes the circular economy through eco-design and the recycling of domestic packaging in Spain. He holds a Degree in Biological Science, is an Honorary Forest Engineer from the Higher Technical School of Forest Engineers at the Polytechnic University of Madrid and completed,Master in Environmental Engineering from the School of Industrial Organization and MBA at the IE Business School. He joined Ecoembes in 1998 after five years working in the paper sector. Since then, his contribution has been fundamental to defining and consolidating Ecoembes as a management model based on public-private collaboration, innovation and environmental education. [Spain]