Business tourism: an important element of a competitive city

IDEASUNO MagazineBusiness tourism: an important element of a competitive city

We hear more and more that Medellin has become the epicenter of business tourism in South America. Bogota won by the so-called Oscar of tourism–the World Travel Awards–as the best Destination for meetings and conferences in South America (2014 and 2015), the Best Getaway Destination in South America (2016). The city has grown most in events tourism in the Americas in the last nine years according to the ICCA ranking’s (International Congress and Convention Association). All of the above make this city’s leadership position clear in the events industry. Medellin is enjoying a purple patch for attracting important national and international events. This undeniably attracts the world’s attention much more to the capital of the Antioquia department.

At least this is clear for those of us who are involved in the tourism sector. However, citizens on the street who have no direct relationship with such matter, might ask themselves how this international recognition and the accelerated growth in events and conventions benefits them, their families, their household economies and their life quality.

Is Medellin’s commitment to the events industry a real development strategy? Does this leadership position truly reflect on the market?

The benefits are clear. Firstly, international visibility is worth mentioning. The fact that Medellin is associated with positive models and that it is the venue of events hosted by organizations as important as the United Nations (2014 World Urban Forum), has a direct impact on the old negative image of Medellin around the world.

The generated knowledge for the city is invaluable. What is the value of having international experts in specialized medical fields during–for instance–the International Cervical Cancer Congress or the Latin America Sleep Congress? Medellin continues to advance and gain knowledge, learning from the world, from best practice and is on the cutting edge in several areas, as reflected in the development of different sectors of the economy.

The economic spillover is the third relevant factor. International meetings, by default, attract international attendees. These visitors come to the city and, apart from just attending to the event, they stay at hotels, use transportation, eat at restaurants and go shopping, among other things. This directly generates jobs, economic impact and ultimately, improves the life quality of inhabitants.

Is Medellin’s commitment to the events industry a real development strategy? Does this leadership position truly reflect on the market? We just need to take a look at the numbers in 2016: 87 events were won by the Medellin Bureau, representing growth above 120 percent over the last five years (2011 closed with 39 events).

Among the renowned events that highlight the city as an epicenter of events in South America include the World Economic Forum (Latin America, 2016), the Global Entrepreneurship Congress (GEC, 2016), and the assembly of the World Tourism Organization (2015).

Some factors have proven Medellin’s strategy in the events industry as the right one. Its climate is certainly a differential advantage. The events calendar is open 365 days a year, and is not limited to summer periods, such as other destinations that depend on the seasons. The cooperative work of the public and private sectors has enabled the generation of comprehensive strategies.  The academia, the business and the public sector articulate on Medellin’s nomination to host events. Finally, the emphasis of the strategy to attract, according to the city’s economic vocations, is a success. Innovation, healthcare, entrepreneurship, sports… are all part of the subjects in which Medellin has significant experience. In turn, they have developed into core areas that orient and guide the search for further opportunities.

Without a doubt, tourism has significantly contributed to Medellin’s advancement in globalization, its economic development and the improvement of its international image. This vision has definitely payed dividends, and must be upheld and strengthened. 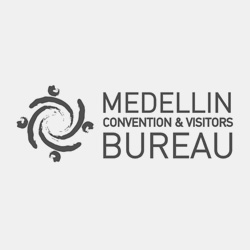