UNO+1: Cities must change to survive, which is why the development of the north of Madrid will be spectacular

IDEASUNO MagazineUNO+1: Cities must change to survive, which is why the development of the north of Madrid will be spectacular

A tall, slim and British man. That is the first image conveyed by Simon Smithson, one of the most renowned architects in Europe, partner and right-hand man of Richard Rogers, winner of the 2007 Pritzker Prize and co-designer of large buildings such as Terminal 4 at the Madrid-Barajas Airport. That project earned him the prestigious Stirling prize, awarded by the Royal Institute of British Architects. Smithson is also a professional dedicated to Spain and Latin America and at his and Richard Rogers’ hands a project is being shaped that, he claims, “in terms of scale is the most important in any European city.” That project is the development of northern Madrid in the operation called Distrito Castellana Norte.

The large problems of cities are mobility and pollution, which is why the private use of cars will decrease, and it will be shared with other means of transport

Smithson welcomes me into his studio in Madrid, located on a light-filled floor on the central Calle Velázquez. He speaks broken and guttural, albeit intelligible, Spanish in a near monotone. When I ask him what is happening in cities and their new prominence, as they are on their way to housing more than 80 percent of the world’s population, he takes his time to respond:

“We are returning to a structure similar to that of Renaissance Italy, when cities were more important than States and this phenomenon is also linked to employment. Since the industrial revolution, the reason for migrating to the city has been employment, to work. The big jobs are tertiary and this is the main reason for urbanization, having a pool of employees who live in metropolises that offer them good jobs. Cities have also started competing with each other and becoming more important.”

Would this movement from country to city explain the electoral and ideological differentiation between urban and rural citizens? Smithson supposes that the conditioning factors of the city explain this phenomenon, but does not delve into a matter that is perhaps more related to politics and sociology than urbanism. Although, then he immediately explains that the problems of modern-day cities are specific:

“In my opinion, I believe that the main issues are mobility, traffic and, consequently, pollution and environmental sustainability. The car will not disappear, but it will have to coexist with new technologies (referring to electric and hybrid vehicles) and public transportation. For example, London already approached this problem, and one of the most significant revolutions was the phenomenon of bicycles as a clean and fast means of transport. There are other urban movements such as pedestrianization, which is a notable characteristic of New York.”

…and what about habitability, and run-down areas of cities?

“Well–nods the architect thoughtfully–I believe that these situations in the suburbs are related to the extension of public services. In Madrid the population growth in recent years has been between 10 and 14 percent, although in occupation of area it is double or triple. The new developments in Madrid–and in other cities–are low density, which entails high costs in urban maintenance, such as lighting, cleaning and public transportation.”

Under these circumstances, how should cities grow? Horizontally or vertically? Once again, Simon Smithson takes his time to reflect:

“Density is not necessarily related to height. That is a bit of a myth. My preference is a combination of a vertical and horizontal city. The height of buildings is somewhat mysterious. After the 9/11 attacks in New York, they said they would reduce building heights, but nonetheless there are more towers under construction than ever.”

In London, the bicycle revolution took place as an alternative, and in New York, the phenomenon of pedestrianization

Smithson has thought inevitably leads to another: Does architecture impose style on a city or does the city determine the style? For the British architect, there is no definitive answer to the question. Again, he takes a long pause before answering:

“The trend since the 1950s indicates that buildings throughout the world will end up being similar, but there are other schools of thought that think that buildings should reflect a city’s spirit. Several factors influence the style of buildings, the raw materials used in construction, climate, and accessibility and, although the technology is shared, buildings must reflect the conditions typical of the citizens’ environment, especially the weather. A good building captures the spirit of the metropolis. In Madrid, people live more in the street; in London, they prefer to stay indoors. There is another factor in the dialogue of buildings in cities: They have responsibility with respect to their occupants, but also for the context of the city.”

Smithson leads projects in Latin America. He confesses that the project in Venezuela is “on hold”. It was a bus station originally, but then shifted to a more complete and aesthetic public space, multi-use, which would also be used as a community space. However, he does speak enthusiastically about a project under construction in Bogota, financed by a private businessman who wants to recover the city’s historic center, which was constructed in the nineteen fifties after the riots known as “El Bogotazo” (April 1948) that destroyed a large part of the city. “The dream is that the Colombian capital will have the best public space in the country,” says the architect, showing optimism for the project that is already in the construction phase. “The first tower will be opened in Bogota in 18 months. There will be offices, a hotel and residential housing.” He also refers to the BBVA headquarters in Mexico, a project about which he feels great satisfaction and pride.

There are more towers under construction than ever, despite the impact of the 9/11 attacks

His challenge, and that of the entire studio, led by Richard Rogers, is the momentous development project in the north of Madrid:

“The north and south districts of the city are not connected. It is as if a chunk of the city were missing. Madrid is a relatively new invention. The Salamanca neighborhood, Gran Vía, La Castellana… these are all spaces from the last century. Cities, including Madrid, have to change in order to survive. Paris completely understood this, as did London with the Olympic Games, and Barcelona for the 1992 Games. There is a convergence of needs that ensure that this project moves forward, along with a general air of enthusiasm. This can be felt in the meetings with neighbors. People understand the project’s importance for Madrid, more than any other.”

Is the project more important than many other projects currently in the portfolio at the studio of Richard Rogers and Simon Smithson? He does not hesitate: “I think it is. It will be spectacular. Madrid is a great city, along with Paris and London, but the metropolis must keep changing and growing, ambitiously like what happened with initiatives like Madrid-Rio.”

I suggest that there does however seem to be something of a phobia of urbanization: “Yes, that is true. There is resistance to return to the life of cities before the crisis, and some city development models were not the best–speaking of the PAUs (urban action development plans) in Spain–but the Castellana Norte project is different, because it goes further than the construction projects of the past. Madrid could be like Paris and thus take on its status, bearing in mind that there is a better life quality in Spain’s capital.” He stresses the importance that this operation in north Madrid has for the verticality of Paseo de la Castellana, which houses political and cultural institutions. This will be its prolongation.

The time is drawing near, but Britain leaving the European Union is still pending.

“We are going to search for a compromise. We, British are artists at reaching them. In addition, we will reach a compromise with the EU. Europe is more important than mere commercial agreements; it is a space of democracy and freedom.” 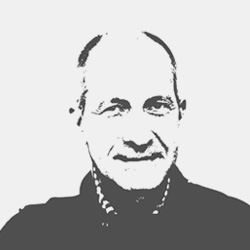 Simon Smithson
Partner at Rogers Stirk Harbour + Partners (RSHP)
Smithson currently runs the RSHP expansion process in South America and manages a multilingual team on a mixed-use scheme in downtown Bogota, the firm's first project in South America. Smithson also oversees the Graphic Design and Visualization department, and has a degree in Architecture from Cambridge University and a Master in Urban Design from the Graduate School of Design, Harvard University. Smithson was Project Architect for the Stirling Prize-winning Terminal 4 at Madrid Barajas Airport. Smithson’s other most notable projects include leading the design of the Campus Palmas Altas, the new headquarters for Abengoa, and an office complex development as a model of sustainability on the outskirts Seville. Smithson has played a fundamental role in projects as important as the ParcBIT sustainable master plan (Palma de Mallorca), the redevelopment of the South Bank Centre in London, the National Assembly in Wales and Antwerp’s Court of Justice. [United Kingdom]