Trump celebrates one hundred days in power with three different visions in the balance: the critical, the moderate and the positive. Starting with the most conflicting, he is a president that has failed. Starting with the economy, it has grown by just 0.7 percent in the first trimester, far lower than needed so that growth would be around 3 or 4 percent by the end of his first year in the power. He has failed in Congress by not getting the approval of his key reform, that of ObamaCare. At the same time, in the draft budget he has been forced to accept not to allocate funds for the building of the wall with Mexico, one of his immediate and most proclaimed objectives. Since the start of systematic measurements, with President Eisenhower, he is the president with the lowest approval rate (43 percent) after one hundred days in office. The movements against him continue, like those which took place in the country’s capital on May 1st. The first and second instances of Justice have put the brakes on his decrees to limit immigration from Muslim countries. The claims about links between his administration and Putin have weakened and threaten his credibility. Foreign policy has had comings and goings, and has revealed that he does not have a defined strategy. He was going to become allies with Putin, but that ended in confrontation over the bombing of Syria; he was going to confront China and he ended up trying to get closer to them because of the North Korea crisis. With the Free Trade Agreement (NAFTA) he announced the United States’ retraction and then he renegotiated this. The “familial” practice of power implies the installation of a “populist culture” in the White House.

The fact that he has a 43 percent approval rate means that the support of his voters remains intact, despite fierce critics in the media

In the favorable vision about the balance of Trump’s first hundred days, the opinion is completely the opposite. The fact that he has a 43 percent approval rate means that the support of his voters remains intact, despite fierce critics in the media. The record values achieved on Wall Street, the Nasdaq and the JP Morgan Bond Index during Trump’s first hundred days are telling proof that the economic prospects are in his favor. Before celebrating one hundred days in office he had launched an ambitious fiscal reform, reducing taxes for companies and the middle class, therefore fulfilling his most important promise in the economic field. Jobs are being created, unemployment is lowering and investments are returning. In Congress, the only problem is to solve the 33 representatives of “House Freedom Caucus,” the extreme right wing of his party–approximately 12 percent of the Republican bench in the Lower Chamber–which coincides with the strategic line of the president, but they request tougher measures. Nearly all of his executive appointments have been approved by the Senate. With the approval of his candidate for the Supreme Court, he has gone to have a 5-4 majority, which could help in his favor in coming months; with this, first and second instance legal decisions could be reversed. Although it is true that the budget did not set out any allocations to build the wall with Mexico, Congress did approve a 10 percent increase in the defense budget, which is a far more important objective and a far larger sum. Trump has demonstrated, with the use of Twitter and social media that he can face up to the chiefly critical media. He has shown firmness in foreign policy with the bombing of Syria and the use of the “mother of all bombs” in Afghanistan, and, for better or for worse, he is heading towards solving the risk that North Korea presents.

In between both interpretations, there are those that maintain that Trump has started to face up to the limits of the system and that one way or another, Trump is adapting to it. By rejecting the decrees about immigration from Muslim countries, the first and second instance justice has limited his use of decrees, and he has accepted this. The same happened with Congress, with the rejection of his ObamaCare project and the Mexico border wall; the president had to accept another limit to his power. In other words, the division of powers is working and limiting Trump’s arbitrariness. The fact that Congress could object the tax reform can lower economic expectations, but at the same time it would confirm that the limitation of power is real and concrete. In foreign policy, the u-turns in terms of Russia and China show that realism ends up being imposed and the use of military power occurs within reasonable limits. The protectionist measures have, in the end, been fewer than those announced. In short, Trump’s unpredictability has been less than anticipated due to the effectiveness of the systems that have limited his decisions.

In the critical vision of Trump, one hundred days have passed with the lowest approval rate in 60 years, the economy is barely growing and he has not achieved his goals in terms of foreign policy

Meanwhile the European elections show a relative slowing down of populism, but at the same time a deepening of the crisis of party structures. The round of the French presidential elections, which Macron won, show, amongst other things, that the two traditional parties were left out of the ballot–it is a crisis within the political system which has not been seen in more than half a century. It raised doubts about the governability emerging from the elections that took place on June 11th and 18th (second round). This crisis of political systems was revealed in the Italian referendum, the Austrian presidential elections and the Dutch general election, although in these last two, populism did not win in the end. On the other hand, in the United Kingdom, the prime minister (Theresa May) may historically triumph in the general election on June 8th, if she achieves for her party close to 50 percent of the votes and close to two thirds of parliament, this would reinforce her decision in favor of a “hard” Brexit. Away from the east, the Turkish referendum has strengthened Erdogan, who will visit Putin, Xi and Trump in May, reinforcing his role as a regional power in the Middle East. On May 9th there were early presidential elections in South Korea between two candidates, under the threat of a nuclear conflict. One candidate takes, with no limitations, a military alliance with the U.S.A., whilst the other leans towards a more pacifist position.

In conclusion, in the critical vision of Trump, one hundred days have passed with the lowest approval rate in 60 years, the economy is barely growing and he has not achieved his goals in terms of foreign policy. In the favorable vision, he has not lost voters, he has managed to take control of the Supreme Court and he has been firm and effective with foreign policy. In the intermediary vision, the president has accepted the limits that Congress and Justice have put in place and he has adopted a pragmatic line in terms of foreign policy, that is to say that the system is working. At the same time, in France the worst situation was avoided and, away from the west, Erdogan grew stronger by winning the referendum. And the early election in South Korea will be carried out under the threat of a nuclear attack. 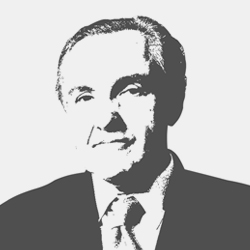 Rosendo Fraga
Manager of the Centro de Estudios Nueva Mayoria
Is a Lawyer who graduated from the Universidad Católica Argentina. Political analyst, journalist and historian. He is a member of the Academia Argentina de la Historia, of the Academia Nacional de Ciencias Morales y políticas, of the Consejo Argetino de las Relaciones Internacionales (CARI), the Instituto de Historia Militar Argentino. He was awarded the Konex prize in Journalist Communication (1997) and the Santa Clara de Asís prize (2005). He has published 43 books on history, political, military and regional affairs. He has been awarded by the government of Brazil, Chile, Spain and Italy. Manager of the Centro de Estudios Nueva Mayoría and the website www.nuevamayoria.com. [Argentina]