Trump ’s electoral triumph last November 8th woke up, against all the odds, big expectations in the U.S. economical and business sectors and was celebrated with big stock market rises.

In amidst the generalized optimism and the favorable climate for the new president’s economical proposals, the investors acknowledged the “reflaction” promoted by Trump as the beginning of a “new era” of prosperity, similar to that at the beginning of the 80s with Reagan’s policies. In particular, the banking sector was one of the main beneficiaries of these rises, encouraged by the expectation of higher interest and a great economic dynamism.

Now that more than one hundred days have passed since Trump took to power, this initial euphoria has vanished somewhat after seeing, once again, that electoral promises are one thing, but carrying them out is another. However, the problem with the economic measures that form a hard nucleus around Trump’s program is not that they are going to be fulfilled, but that by fulfilling them there may be very negative effects on the economy, through them not being able to adapt to the global world of the 21st century. For that reason, what could happen is that start blurring away until they are completely forgotten.

To be fair, it has to be said that there is a lot to be thankful for in the new American president’s pro-business language and his liberalizing initiatives which aim to eliminate the suffocating bureaucracy and regulation that companies suffer from today. We should wish Trump luck in this effort, which will run into a wall of interest created by the numerous regulatory agencies and organizations, and by the thousands of functionaries whose one raison d’être is not public utility, but the protection of their own personal interests, paralyzing the initiative with an useless formality which, on occasions, borders ridiculous.

Having said that, the reality is that the ensemble of Trump’s economic proposal is simply not going in the right direction. The axis of these proposals is the fiscal reflaction, in other others, stimulating economic growth though the aggressive lowering of taxes and the program of infrastructural investment. However, this is not a “global” reflation, but a reflation exclusively for the United States and only for the United States, meaning it is protectionist.

This generates three problems. The first is that pumping more fuel into an economy like the North American’s which is in full employment (4.5 percent unemployment rate) and whose level of production capacity utilization is very high, this could result in more inflation than growth, tensioning the types of interest upwards to a large extent than foreseen. After eight years of massive monetary intervention, the most active markets have become addicted to the “easy money” and a further raise of kinds will provoke, without a doubt, strong turbulence in the markets, impacting the real economy.

The second problem is the dollar. The Trump program, if it were to be fulfilled, would have a powerful upward impact on the dollar, in a world that is indebted in dollars. There are eight and a half trillion dollars of debt from non U.S.A. residents and a strong rise in the dollar would create problems, not just for the North American economy, but also for the various banking entities, especially Asian ones, and some emerging economies with elevated liabilities in dollars.

Because of all of this, it is highly doubtful that Trump’s program will be completed, but it is even more doubtful that, if it is completed, it will bring about an age of prosperity.

Since April, the American stock market has moderated the euphoria with which Trump was received and a few indicators, such as the futures of petrol or the types of long term interest, and it does not seem to anticipate strong economic growth. The so-called “Trump trade” has lost strength and in a certain extent there is a feeling of returning to a “pre-Trump” world. A world of positive economic growth, but low (the North American GDP grew just 0.7 percent in the first trimester) in the way inflation and the types of interest can bounce back, but not too much.

In this new scenario, the European stock markets, which had been left behind, are behaving better than the American one after noting a greater growth in the euro-zone and after having cleared up the political uncertainty in France. The fear of deflation, which was a dominant topic at the beginning of last year, has given way to the anticipation of growth of the, until recently a little depressing, euro-zone economy.

Once more, as has frequently happened over recent years, the economy and financial markets are facing up to a dilemma of if we are at the edge of a stage of strong growth (the famous “escape velocity”) as the stock markets are anticipating, or, on the contrary, if the bonds and raw material markets are right to discount, as the International Monetary Fund would say, a mediocre growth.

Time will tell which of these two visions is the correct one, but looking back, history teaches us that, in general, the bond markets have been better predictors than the equity markets. 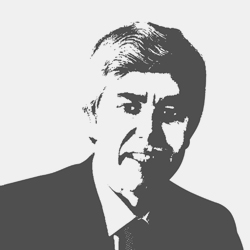 Juan Carlos Ureta
Chairman of Renta 4
Is the Chairman of Renta 4, the first Spanish bank specialized in asset management and capital markets quoted in the Spanish stock exchange. He was Chairman of the Instituto Español de Analistas Financieros and the Fundación de Estudios Financieros, from 2010 to 2016. He was appointed State Attorney in 1980 and provided services in the Ministry of Economy and Finance from 1980 to 1984; he is currently on leave of absence. He holds a degree from the University of Deusto (Bilbao) in the Legal-Financial Speciality, with a Special Graduation Prize and First National Prize of completion of University Studies (1978). [Spain]