UNO+1: An interview to Enrique Krauze by José Antonio Zarzalejos

I do not think that Trump  is Latin America’s priority

He is bordering seventy in intellectual plenitude. “I’m a historian, an essayist and an editor,” he tells me to justify his separation of “academic intellectuality.” Enrique Krauze (Mexico City, 1947) is, without a doubt, a great icon of the historiography of the Mexican Revolution, one of the most recognized liberal essayists within the Spanish speaking world and an accomplished debater when it comes to defending democracy, rights and freedoms.

He was one of the signatories of the letter by Hispanic artists and intellectuals which, in the summer prior to Donald Trump’s election (2016), showed their worry over his possible presidency of the United States, and was finally produced last November 8th. Krauze has clearly become one of the most constant dialectical evils against what the U.S. Head of State represents. The Mexican considers Trump an “irresponsible, narcissistic, megalomaniacal pyromaniac” and credits him with having perpetrated “an immense damage.” However, this meticulous and brilliant historian does not believe that Trump is Latin America’s priority or that they are paying much attention to his policies, because a lot of the countries in the region do not depend that much on what happens in the United States, although we all do.

For Krauze, each country in Latin America is immersed in their own problems: “Brazil in corruption, Argentina in rebuilding the economy, Chile in keeping their democratic and economic progress, Venezuela in the hell [that it finds itself in] and Cuba waiting.” But the analyst that the Mexican has inside narrows it down:

Some governments, like the Argentinian and Peruvian ones, have discretely moved closer to Trump, seeking to minimize damage and introduce certain rationality to his character. Kuczynski and Macri have done the right thing. But Latin America is focused on its own problems and, likewise, it doesn’t seem to be a region of utmost importance for Trump, this has its advantages.

He does, however, regret the current lack of ethics in the U.S. capital, because believes that the “strong moral presence in Washington that has been lost with Trump, would have a defining effect on the Venezuelan and Cuban situations.” According to him, the “key to Cuba is in Venezuela, although at any given moment the Russians are there,” the intellectual, that knows the New Continent like the back of his hand, seems to be sorry for himself, repeating that “the biggest problem in Latin America is Venezuela.”

The biggest problem in Latin America is Venezuela; the Castro’s-regime is also dependent on this country

I ask him about his country, about Mexico.

“Peña Nieto’s invitation for Trump on 31st August 2016 was a historical mistake. He won everything and didn’t give anything in return. I don’t know how many votes he provided the North American with, but it was definitely some. The opportunity to make a public claim for the wrongdoings towards Mexico was lost.”

Krauze believes that there is a channel of communication between the Mexican Foreign Minister and Trump’s formal and informal representatives, in regards to the Free Trade Agreement (NAFTA). “It would appear that the atmosphere between the negotiators is moderately favorable towards an arrangement that doesn’t destroy the agreement,” Krauze cautiously continues: “I think that is where the negotiations are going, although I would never rule out, in an early riser burst, that on the eve of the confirmation of the agreement, Trump orders to cancel it.”

There is a favorable atmosphere to maintain the validity of NAFTA

With the Free Trade Agreement (FTA) being important for Krauze, there are:

Other highly worrying issues in the relationship between the two countries, such as the hate speech of nativism, although that has decreased because the U.S. president has opened up too many fronts, even some that concern his own survival in the White House, to such an extent that he seems convinced that Mexico is one of his lesser problems.

And the border wall promised at the expense of the Mexicans? : “The truth is he has been convinced that it is unfeasible, unnecessary and uneconomical, and that he would be faced with all kinds of conflicts and claims in the U.S.A.” And so, “the bleak panorama that was seen between the countries just a few months ago seems to have cleared a little, but I would never claim a victory, because Trump is a tyrant.”

And if it is like that, are we facing up to this reality? Krauze’s answer is negative and invokes bravery.

On the stage of politics, Merkel is the one that has understood who Trump truly is, she made the statements she had to make with solidity and sincerity, and I particularly liked the theatrical gesture from the great reader of Moliere that is Macron, when he intelligently uprooted Trump by walking up to him and then twisting to greet the German chancellor first. It is important that Europe has these types of gestures, and it is just as important that it gains time, as it is for Mexico. Playing with times is necessary for my country, especially if NAFTA doesn’t thrive, because new allies, new political actors and new companies will have to be found.

Kuczynski and Macri have done the right thing by approaching Trump to minimize the damage.

Enrique Krauze holds a firm position–that is the failure of the G7 last May, a disappointing meeting in Taorima (Sicily)–: “Trump represents an emergency system in all senses: political, diplomatic, economic and even in terms of the military and the environment.” The formula is “political and diplomatic strength and imagination so that this character trips up and shows off his incapability.” Although he does not expect, or believe it to be probable, he does not rule out the chance of an impeachment, albeit a “remote” chance. This is due to the:

Polarization of the United States’ society, because the xenophobic, fascist nucleus that supports him is not a minority, but widely spread, far larger than we thought, because there is a racist layer that we didn’t want to see, that’s to say that Trump has support away from the Senate and Congress. Luckily, we can always count on Trump to work against himself.

Mexico is now one of the minor problems of the President of the United States.

We say our goodbyes making references to Spain, a country that Krauze frequently visits–”it feels like home, like Mexico”–, as he considers himself an intellectual grandson of the many political exiles of the Spanish Second Republic who set up their intellectual home there, much like León Felipe. He remembers the Spanish distinctions that have passed: the Order of Isabel the Catholic, and of Alfonso X the Wise, and he praises the country:

Spain is an area of coexistence–further away from its political debates–and of a civility that, I’m afraid, the Spanish themselves don’t know how to value very well. Spain has defied the laws of historical determinism and the Spanish have not realized this. I will try to persuade them that it’s not just their immense literature, and their art, but also their conquests in civil life. Let’s hope the call of populism never convinces them.

The border wall between the two countries is unfeasible, unnecessary and uneconomical

He glances at the three most recent editions of UNO that I have brought for him to get to know the magazine, he promises to read them and praises, after a closer look, its design and format. A small advance: he is preparing an anthology of his essays and he has a few new books in the pipeline. We will meet for another conversation when they are published. 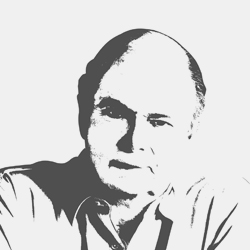 Enrique Krauze
Founder and CEO of the magazine Letras Libres
Is a historian and essayist, Founder and CEO of the magazine Letras Libres and the editorial Clío. Krauze is an industrial engineer and holds a PhD in History from the Colegio de México. For over 35 years he has published books experimenting with different genres, such as biographies, history, essays and interviews. He has also directed documentaries and tv series about Mexican history. He joined the Academia Mexicana de la Historia in 1990 and was appointed as member of the Colegio Nacional in 2005. He has been awarded several prizes such as the Premio Comillas de Biografía in Spain in 1993 or the Premio Nacional de Historia by the Government of Mexico in 2010. [Mexico]